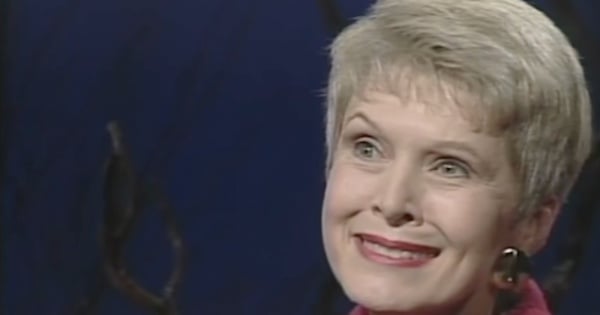 This silly kid on a toilet gives a whole new meaning to potty humor! And he had his dad and everyone else cracking up with the funny declaration he makes while using such a silly voice!

One of the joys of parenting is potty training. Teaching tiny humans to use the toilet instead of a diaper comes with plenty of challenges.

RELATED: Uncle's Silly Voices Have Baby Laughing Hysterically As He Reads Her A Story

But there can be some pretty funny moments in there, too!

Kid On Toilet Cracks Everyone Up

You never quite know what is going to come out of a toddler’s mouth. And in the midst of potty training their toddler, Greg and Dani DeVito got a hilarious surprise.

The couple’s son, Matt, had just used the potty. And while this kid was on the toilet, he had his parents cracking up as he announced, “I didn’t poop, I peed.”

It wasn’t so much what little Matt said that made it so funny, but rather how he said it. The adorable kid crinkled up his face into a stern look and used a deep, serious tone while giving his toilet report.

“Not sure why he was doing this voice,” Dani wrote when sharing the hilarious video online.

The tiny tot’s earnest declaration had his dad, Greg, cracking up. Matt continued repeating the phrase, using the same booming voice and adding in a finger point for extra emphasis. And by this point, Greg is laughing so hard he’s crying!

“You sad Daddy?” he asked in the sweetest voice.

But Greg explained to his son how the tears were from laughing so hard. He assured his little boy he was very happy.

Since Matt’s declaration had them laughing so hard, Dani and Greg decided to share the funny video of their kid on the toilet. Because we could certainly all use a little more joy and laughter in our lives, right?

What the couple didn’t expect was for their son to go viral. But his hilarious announcement of “I didn’t poop, I peed” instantly became an internet sensation!

Folks from all over found themselves laughing just as hard as Greg. Even Kelly Clarkson featured the funny video of this kid on a toilet as part of her “What I’m Liking” on social media.

Children truly are a blessing from the Lord. And this hilarious video captured by Greg and Dani is just a brief glimpse into the joys of parenthood.

YOU MAY ALSO LIKE: Stubborn Toddler Argues With Mom And Dad Even Though She's Been Caught Red-Handed

Kids see the world through a completely different lens than adults. And their fresh perspective and unique personalities can have us cracking up at the most unlikely moments. What a gift!

WATCH: Kid On Toilet Has Dad Laughing: “I Didn’t Poop, I Peed”