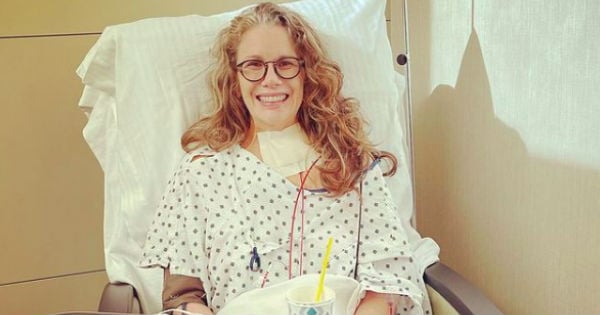 Here’s everything you need to know about the true meaning of the Christmas tree and how it has evolved throughout history.

As the holidays get closer, more and more decorated Christmas trees can be seen twinkling through the windows of homes across America. For generations, adorning the tree has been a holiday tradition for families across many nations. But how did this tradition begin? How does the evergreen represent the Christian tradition?

RELATED: The Story Behind Christmas Spider and Tinsel on Your Tree

Where did the tradition of the Christmas tree begin and does it have a pagan origin?

In the ancient Egyptian tradition, many celebrations occurred around the time of the Winter Solstice, which is the shortest day and the longest night of the year. The Egyptians believed that this was when the sun god, Ra returned in strength. The solstice symbolized a time of renewal and hope. To celebrate, the people filled their homes with evergreen boughs. They chose the evergreen trees because they maintained their color throughout the harsh winter months. Other people groups, including Roman and Celtic cultures, hung evergreens during the Winter Solstice in celebration, and to keep away evil spirits and illness.

Most historians believe Christmas trees originated from a guild in Freiburg, Germany, who decorated evergreen trees with fruit, tinsel, wafers, and gingerbread to perform "Paradise Plays" on Christmas Eve. These plays celebrated the story of Adam and Eve. In the 16th century, the plays were banned from the public in many places. This corresponds with the time in which Christians first began to bring evergreen trees into their homes to celebrate Christ. Families who could not afford decorated trees simply stacked wood in celebration. These "Christmas pyramids" evolved into wooden shelves holding figurines, candles, and even a star. Eventually, the paradise tree and Christmas pyramid merged to become the modern Christmas tree. The tradition remained in Germany until the 19th century when people began emigrating from Germany.

History Of The Christmas Tree Legends 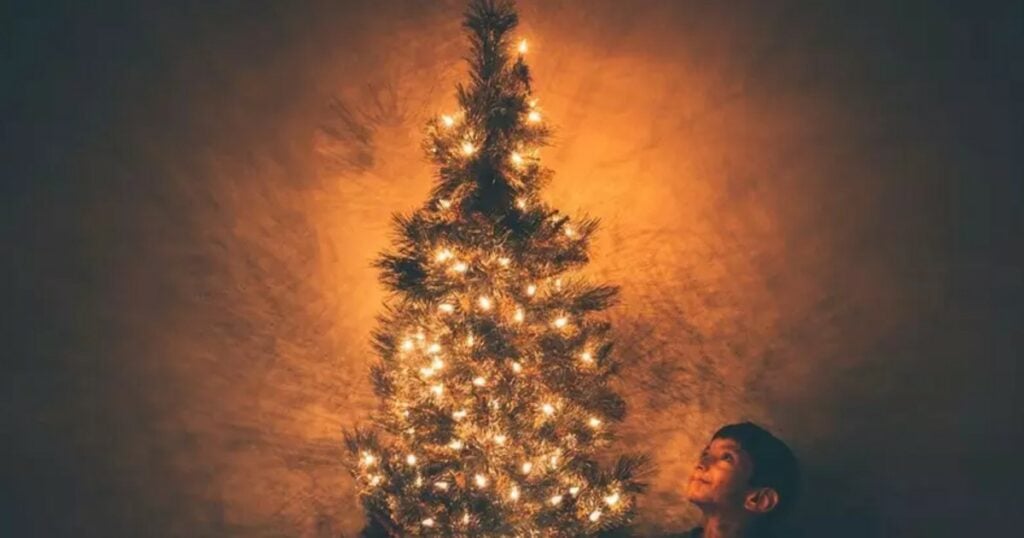 There are several legends involving how Christmas trees came into existence. The first comes from the English monk Boniface. In the eighth century, Germanic pagans were making sacrifices to the Greek god, Thor. The Benedictine monk cut down the oak tree where the sacrifices were taking place and converted the idolaters to Christianity. According to the legend, a fir tree grew from the fallen oak. The evergreen represented the image of God and new life in Christ.

Another legend of the Christmas tree stems from Martin Luther. Some believe the Protestant revolutionary started lighting candles in trees after walking through the woods on a snowy night. The sight of the moon hitting the snow-glistened trees reminded him of the light of Christ that came down from Heaven. It is also from this experience that inspired him to pen the lyrics to the 1535 Christmas hymn, "From Heaven Above to Earth I Come."

History Of The Christmas Tree Tradition In The U.S.

Until the mid-nineteenth century, the Christmas tree was seen as a primarily pagan tradition in the United States. The early Puritan settlers did not accept the German tradition initially because of its cultic roots. In 1659, a law was established in Massachusetts outlawing the celebration of Christmas, with the exception of church attendance. Hanging decorations of any kind was outlawed, especially on Christmas trees. As more German immigrants entered America, the tradition became more accepted.

In 1848, the London News published an image of Queen Victoria and Prince Albert with their family celebrating around their decorated tree. This photo and its reprints in America popularized the modern idea of the Christmas tree, with its glistening lights, shiny bobbles, and awaiting presents.

Since the 19th century, Americans have embraced the evergreen tree as an annual staple to Christmas cheer. The lighting of the tree in Rockefeller center, as well in other hometowns often symbolizes the beginning of the holiday season.

Meaning Of The Christmas Tree Christian 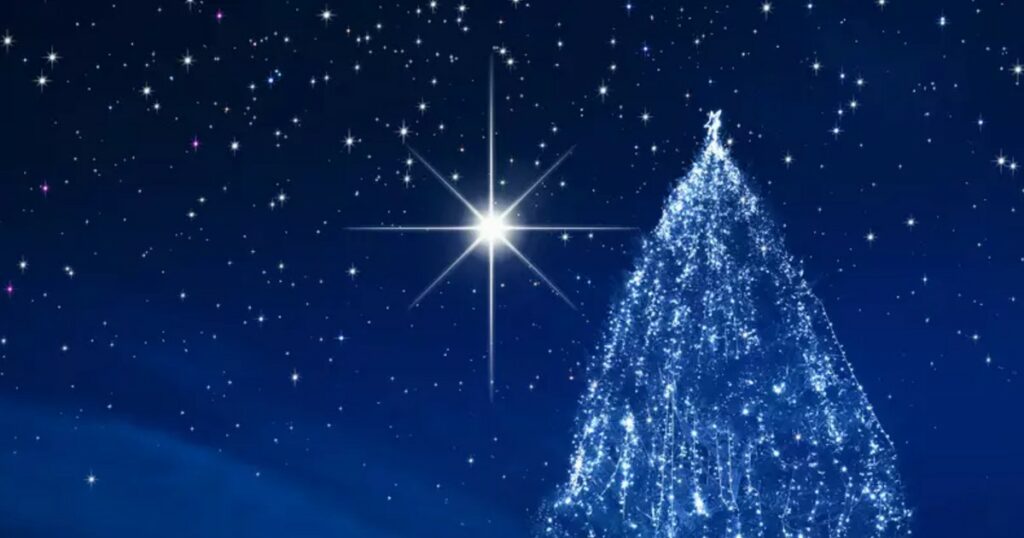 When you think of Christmas Day, one of the first images that comes to mind is the Christmas tree. But what is the religious significance? While there is no overt reference to an evergreen treen in relation to the actual birth story of Christ, believers have attached religious meaning to the once pagan symbol.

RELATED: The Religious Meaning Behind ‘The Twelve Days Of Christmas'

The Choice of the Evergreen

The evergreen tree is a tree that maintains its color throughout the year. Even in the depths of winter, the evergreen tree shows its life. This characteristic of everlasting life represents the life we have in Christ (John 3:16).

The Shape of the tree

The triangular shape of the Christmas tree has often been used to reference the Holy Trinity (Matthew 28:18-19). The upward pointing branches often symbolize our praise to God.

The Lights on the tree

For many Christians, candles or lights on the tree signify how Jesus came as the light into the world. The star placed atop the tree represents the star the wise men followed to Bethlehem (Matthew 2:9).

Presents Under the tree

The Cutting of the Tree

When the evergreen tree is cut, it is struck down to its death, only to be raised to glory in splendor as a decorated Christmas tree. This transformation of the tree symbolizes how Jesus died on a tree and was raised to new life on the third day.

Should Christians Have Christmas Trees in Their Homes?

While most people never really think about the history or the practice of putting up a Christmas tree, some Christians do not celebrate the season with an evergreen. Here are a few reasons why.

If we take an honest look at the tradition of the Christmas tree, the roots and religious symbolism is not overwhelmingly representative of the birth of Christ. Yet, the biblical arguments against it are not vast either. The principle derived from Jeremiah 10:1-5 is to not participate in idolatry. The cultural practice of the passage happened to be the cutting and decorating of trees.

Ultimately, the choice to celebrate with a Christmas tree during the holidays is a personal one. While many people do focus more on the dazzling aspects of the celebration, there can be beauty in the symbolism. First Corinthians 10:31 states, "So, whether you eat, or drink, or whatever you do, do all to the glory of God." This passage gives us freedom to choose to celebrate the birth of Christ in a way we will connect to God most intimately. Yet, as we choose in freedom how to celebrate, let us remember to offer grace to those who choose to celebrate differently.

Cortney Whiting is a wife and mom of two preteens. She received her Master of Theology Degree from Dallas Theological Seminary. After serving in the church for nearly 15 years, Cortney currently teaches at a Christian school and writes for various Christian ministries. You can find her at her blog, https://recapturefaith.com.

YOU MAY ALSO LIKE: 10 Christmas Carols that Tell the Real Story of Christmas

LISTEN: The Moment You Never Noticed in A Charlie Brown Christmas