Sometimes even a flash mob is not what it seems. At a busy train station, Adam arranges a surprise orchestra Flash Mob proposal for his girlfriend, Mlayne. Thinking she was going through Waterloo Station to meet family and friends for her birthday, Mlayne was in for quite the surprise!

RELATED: Emotional Flash Mob Proposal Sure To Bring On The Tears

As the video opens, a woman in a stunning red dress is standing in the middle of the bustling station. Looking at her watch, it's clear that she is also holding a conductor's baton. But why?

A solo violinist soon reveals the reason, as he’s filmed walking up to the woman with his violin and case in hand. He hands the case off to a passerby (hint: It's Adam!). As the musician begins playing the familiar "Hallelujah Chorus" from Handel's "Messiah" other musicians begin appearing around Adam and Mlayne. Eventually, the stunning orchestra surrounds the couple! 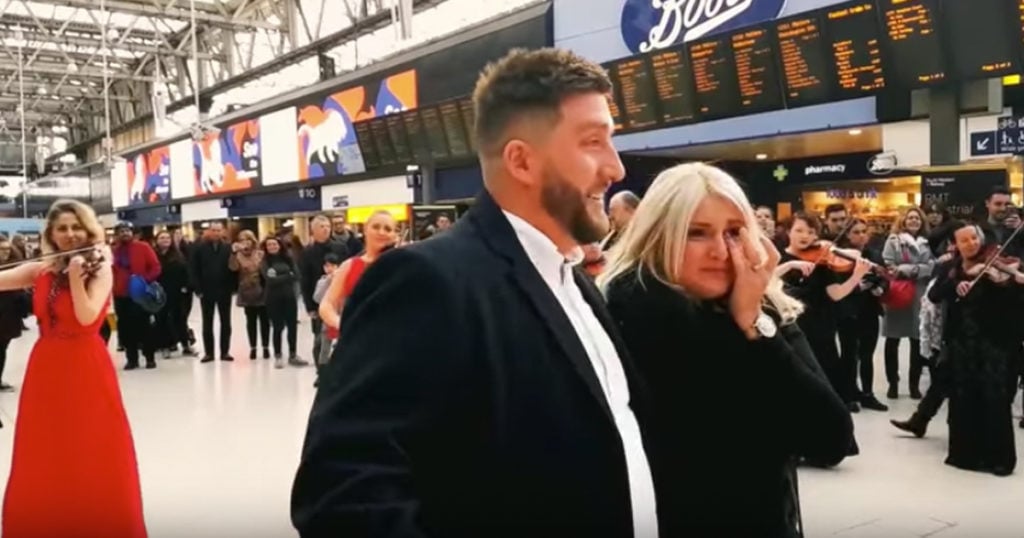 Once everyone’s in place, the song seamlessly morphs into the contemporary song, "Just the Way You Are" by artist Bruno Mars.

"When I see your face

There’s not a thing that I would change

Just the way you are

And when you smile

The whole world stops and stares for a while

Just the way you are"

As the song concludes, Adam opens the violin case he was holding to reveal the surprise message inside: "Will You Marry Me" with a red rose attached. Mlayne, already in tears from the orchestra flash mob proposal, said YES and the joyous occasion was marked with whistles and cheers from the surrounding crowd. Congratulations to the happy couple and may God bless their upcoming nuptials!