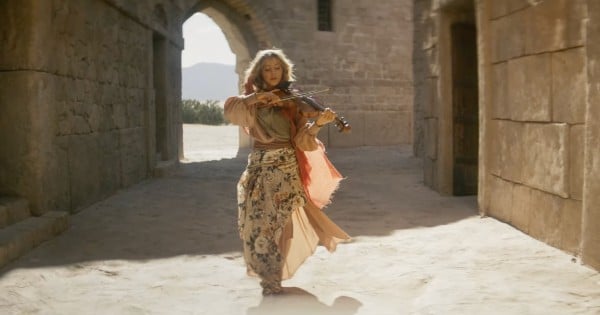 Never afraid to try something new, the Blue Man Group is playing PVC pipes as a musical instrument and the results are amazing! Are you ready to experience some classic Christmas songs in a completely different way?

The video starts off with the Blue Man Group looking into a snow globe that has tiny snow-covered trees inside it. Then, the blue-faced performers start cheerfully playing on PVC pipes, using different tones to recreate famous Christmas songs.

The first song is ‘We Wish You A Merry Christmas,' followed by ‘Deck The Halls.' And they finish the performance with ‘Jingle Bells.' Then, fake snow starts to fall from the ceiling and the members of the Blue Man Group look up in wonder.

Suddenly, they are now in Christmas sweaters drinking hot cocoa. As the performance ends and the video wraps up, a message saying "Happy Holidays From Blue Man Group" flashes on the screen.

A Blue Man Group Concert Is Always An Adventure

Who knew playing PVC pipes as a musical instrument could be so impressive?! What a fun and creative Christmas performance that is very much expected from the Blue Man Group!

Did you know that becoming a Blue Man is no easy task? After an extensive audition, only a few are selected to take part in Blue Man Group’s intensive 8-week training course.

And according to their YouTube page, "Blue Man Group will rock your world, blow your mind, and unleash your spirit. Leave your expectations at the door and let three bald and blue men take you on a spectacular journey bursting with music, laughter and surprises. 35 million people of all ages, languages and cultures know what Blue Man Group is really about."

You can catch their shows in Las Vegas, New York, Boston, Chicago, Orlando, and around the world!

YOU MAY ALSO LIKE: Get In The Spirit With Children's Choir Singing Christmas Songs From The Polar Express

We hope you enjoyed this performance by the Blue Man Group of playing holiday songs on PVC pipe instruments in their winter wonderland! May the playfulness remind you of the joy that this season brings!

LISTEN: Hidden Meaning Behind ‘The Twelve Days of Christmas’