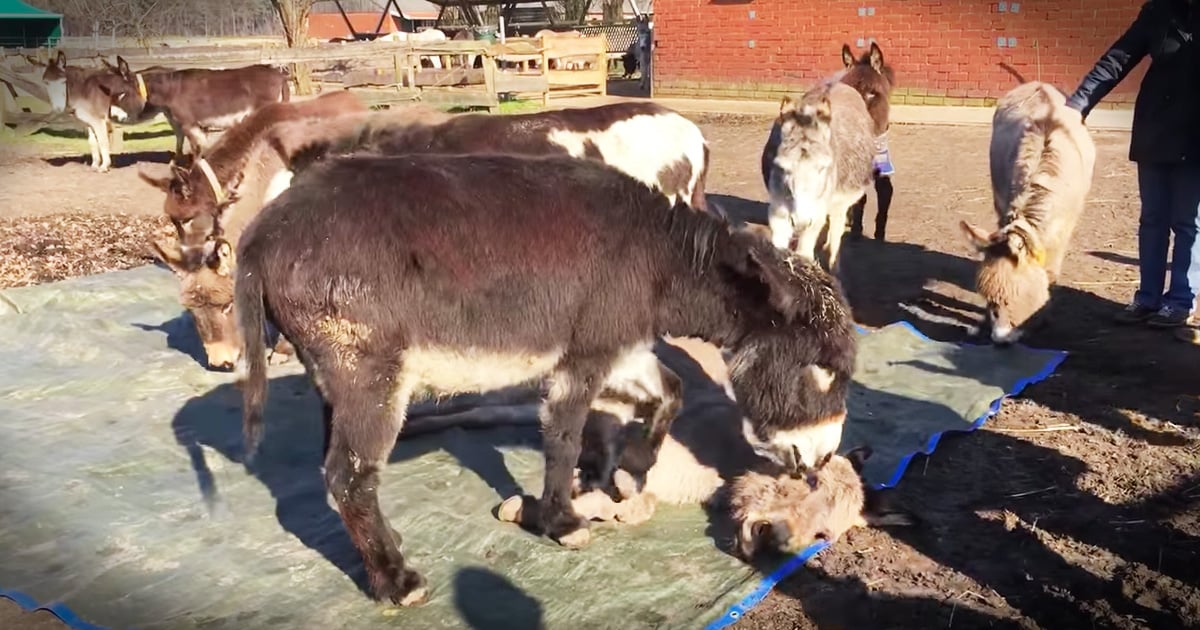 If you’ve ever wondered if animals are capable of compassion, a photo has gone viral that answers that question with a resounding YES! In it, a severely abused puppy named Sammie is being treated for injuries sustained from a level of animal cruelty that’s unfathomable. But another shelter dog, Simon, is there to remind him (and us) that love and compassion have the power to outshine the evil in this world! 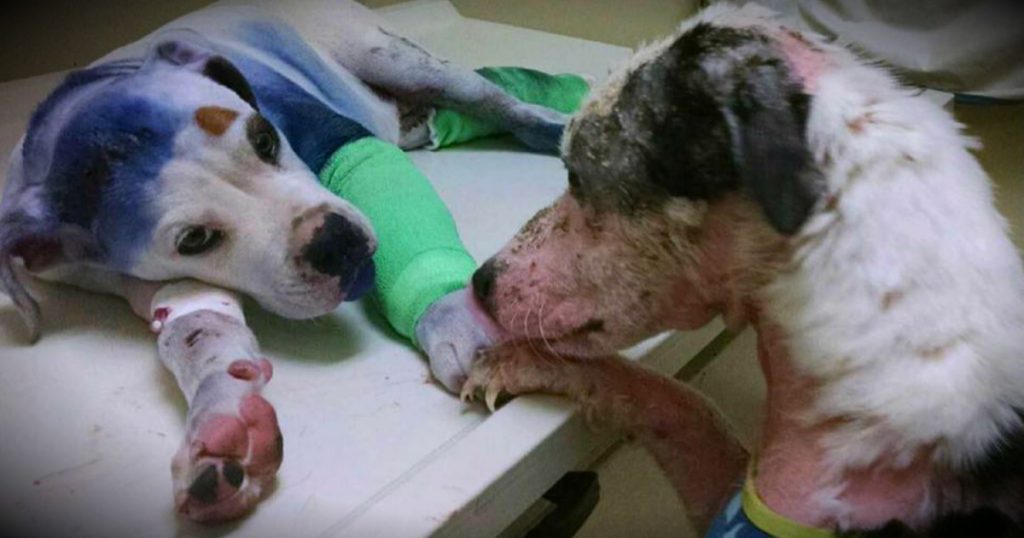 ***WARNING: Some of the images are graphic in nature***

Sammie is a 5-month-old Boxer mix who was rescued by the NY based animal rescue, Rescue Dogs Rock NYC, via their South Carolina vet partner. A stranger dropped the stray dog off on the verge of death, and it’s estimated the dog suffered the brutal attack several days before he was brought in. 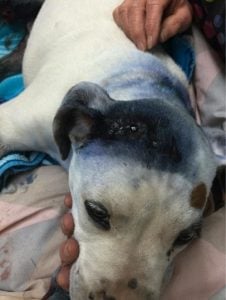 Sammie’s wounds were extensive and a result of being spray painted, shot in the head and dragged behind a car. It’s one of the most horrific cases of abuse the rescue organization has ever seen.

The kind humans at the vet immediately sprang into action, trying not only to save the poor dog, but also to show the severely abused puppy that the evil he’d already encountered in his short life was not all that existed — that there was love in this world, too.

But that message was best delivered by a 1-year-old Border Collie mix and fellow rescue dog, Simon. He, too, had endured abuse at the hands of humans. But he’d also experienced compassion from the humans at another animal shelter who’d rescued him.

RELATED: Abuse left this pup with only half a face, but she still has a heart full of love

Simon was suffering from a bad case of the skin disease, mange, and was being treated at the same vet as Sammie. Simon heard the cries of the severely abused puppy from his kennel. 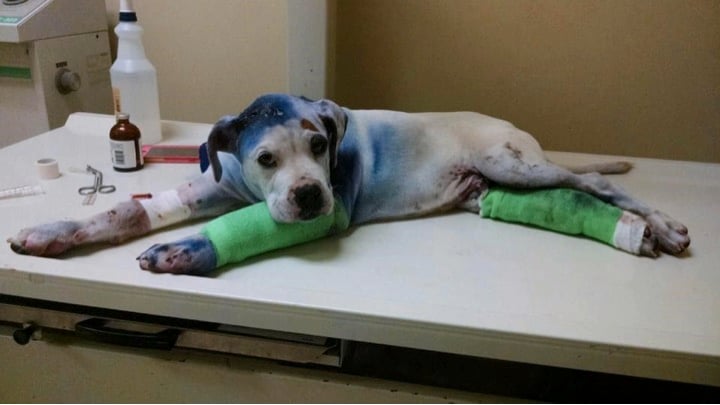 As soon as Simon was let out, the concerned dog went straight to the x-ray table where Sammie lay, and put his paw on the table. Next, the two touched noses and a stunning friendship was instantly forged.

The beautiful moment was caught on camera and shared on Facebook, where it soon went viral.

“The picture really speaks for itself,” said Stacey Silverstein, the cofounder of Rescue Dogs Rock NYC. “You can see Simon comforting Sammie. It shows that animals have compassion and they feel. Simon would go to Sammie’s kennel to comfort him and play with him and sit with him often.” 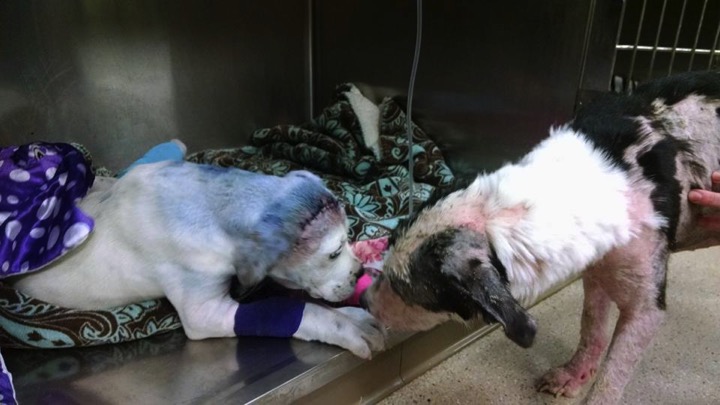 From there, the special bond only strengthened, with Simon acting as Sammie’s caretaker. He would go to see Sammie at his kennel often, and the visits were a frenzy of happy tail wagging!

Watch the two pals in the video below:

The attention Sammie and Simon’s precious photo received resulted in a massive outpouring of love and support. And thanks to that, the fundraising goal set up for Sammie’s medical treatment was not only met, but exceeded!

RELATED: The internet rallied behind this abused pup and her recovery

Sammie has undergone the first of his surgeries, which lasted more than 3 hours. But with his head stitched up and his hurt legs healing, so far Sammie’s showing great signs of improvement. 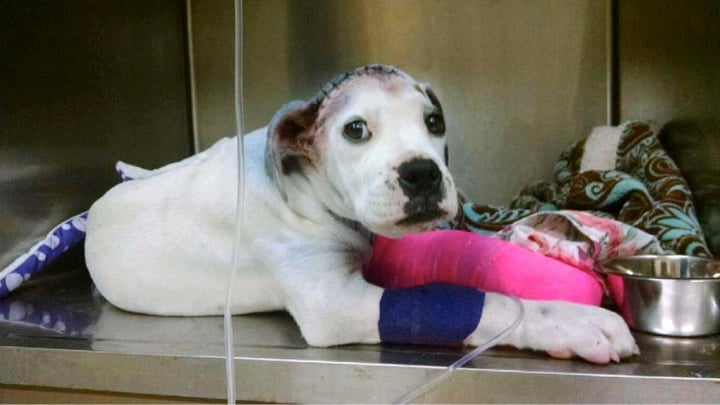 Sammie still has a long road to recovery before he can be adopted. But now he’s got a fighting chance, as well as a foster home to provide the love and security he needs to focus on getting better!

This unlikely pair finds comfort in each other after experiencing traumatic pasts! 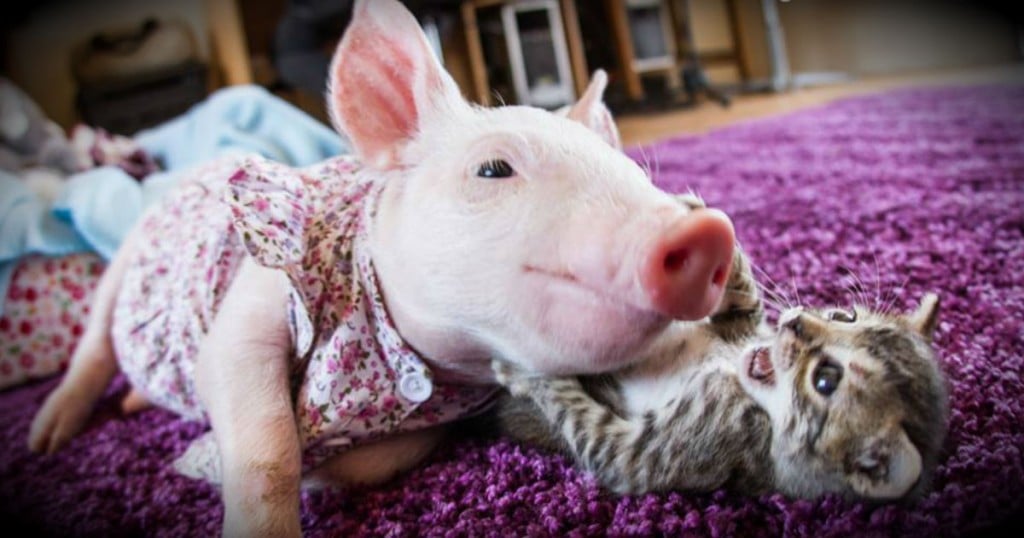