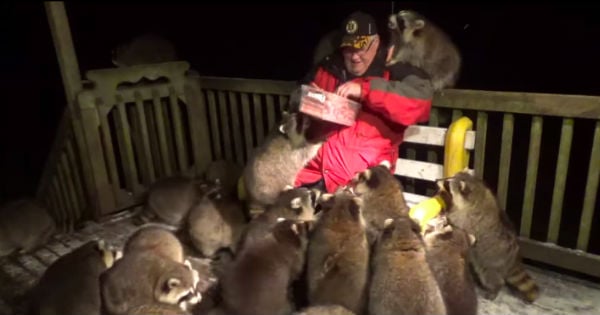 Sometimes you just need to dance it out. At least that's how Tucker's mom captioned his moves. Tucker, a Golden Retriever dancing in the backseat of his mom's car has the entire internet cracking up at his moves with more than six million views!

Just what exactly was this dancing golden retriever doing? He was busting a giddy-up move in between rubbing his body on the back seat of the car. Just as his human mom, Courtney Budzyn, asks what he's doing, Tucker pauses to look at her as if to say, "What do you think I'm doing, you should be doing it with me!" Then he proceeds to "giddy-up" as the song suggests.

A post shared by TUCKER | The Golden Retriever (@tuckerbudzyn)

Look at the way he wiggles his body to the beat of the music! Absolutely adorable. The song that Tucker is dancing to is "Low" by Nbhd Nick that people can't help but rock out to and it looks like animals can't stop themselves from moving with the music as well! As soon as he's done dancing, the video is then captioned, "My work here is done."

The twenty-eight-second video clip was shared on Tucker's own Instagram page and it has gone viral. One viewer commented, “Just love the videos. They are a pleasant distraction from what is going on in the world. Thank you." While another said, "I laughed really hard at this. I wanna pet him real bad."

YOU MAY ALSO LIKE: Teen Faced Choice to Have Half His Body Amputated to Survive Forklift Accident

And another fan added, "You are one funny dog! Love me some Tucker!" Apparently, this isn't Tucker's only video. He's had his own Youtube channel since 2018 and happens to be bathtub-obsessed. Good to know, right? With more than 2.64 million subscribers, I'm pretty sure thousands of people are sending up prayers of gratitude for the way our creator God made Mr. Tucker. Get ready to laugh, you'll be so glad you pushed play!

WATCH: Golden Retriever Dancing In The Backseat Has The Entire Internet Cracking Up At His ‘Moves’

A post shared by TUCKER | The Golden Retriever (@tuckerbudzyn)

He will yet fill your mouth with laughter and your lips with shouts of joy. Job 8:21