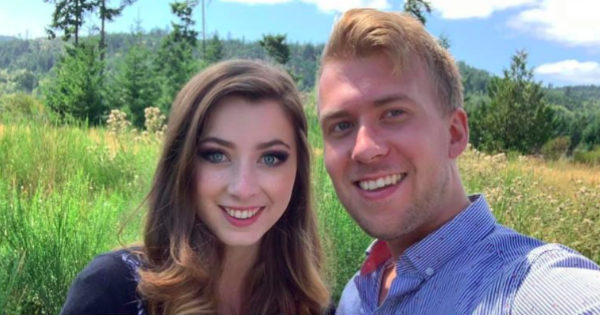 Some choices we can only pray to never have to make. One teen faced the choice to have half his body amputated to survive a forklift accident.

Montana teenager Loren Schauerswas was driving a forklift for work when he found himself in a very dangerous and deadly situation.

RELATED: 1-Year-Old Boy Has Best Reaction When He Spots Stranger with the Same Difference as Him

Loren was driving the forklift over a bridge when impatient drivers sped up to get around him. The bridge was too narrow, and he ended up too far to the side as the vehicles illegally passed him. A tire came off the side of the road, and it was enough to tip the heavy equipment off balance, and it began to fall.

The forklift began to fall with Loren in it as if in slow motion. On the way down, Loren fought to free himself from the vehicle, and then he frantically tried to stay atop the forklift as it fell.

But ultimately, gravity took over and Loren found himself at the bottom of the ravine. He didn't lose consciousness. He saw everything as the forklift fell directly onto him, pinning him to the ground. Loren witnessed everything, including his arm and lower body being crushed.

The four-ton forklift crushed his body beneath it and left him with serious injuries.

The accident was so serious that doctors gave 19-year-old Loren a choice. Die from his injuries, or allow doctors to amputate half of his body.

Loren chose life and he was whisked away for an emergency hemicorporectomy surgery.

His girlfriend, Sabia Reiche, feared the worst. She expected Loren to die, and she said her goodbyes to him multiple times.

Teen Given Choice to Have Half Body Amputated After Forklift Accident

The couple had been dating for 18 months and the tragedy ultimately brought them closer.

“Every medical professional I come across is pretty amazed by everything, especially with the story that comes along with my injuries."

The specialists taking care of him believed he would be stuck in a hospital for over a year. In reality, he stayed three months before starting one month of rehab. Afterward, he went home.

Sabia stated, “Throughout it all, Loren has been super innovative in order to make himself as independent as possible...So many people handle these things so differently and I feel like he’s really beat all odds, both mentally and physically.

Loren is still adjusting to a new life, one he considers more "simplistic" with less he is physically able to do. Still, he isn't letting life pass him by. He has proposed to Sabia and has plans to start a family.

He shared, "My best advice to anyone going through something like this is that you can’t focus on the things you can’t have and you must live your life to the fullest with what you do have.”

And with that positive outlook, we're sure that God will use Loren to do great things!

YOU MAY ALSO LIKE: Man Declared Brain Dead Makes Miraculous Recovery No One Saw Coming

I can do all things through him who strengthens me. Philippians 4:13