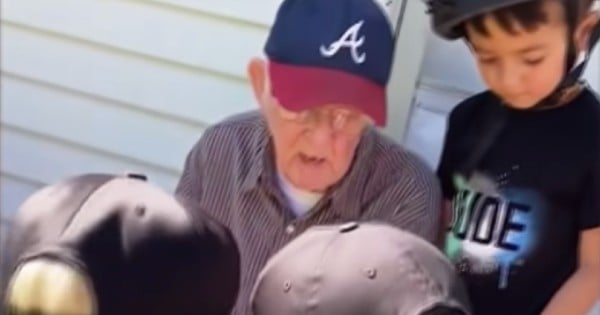 One Waffle House waitress had a very unusual day when she met a special customer. What made him special? Well, on this particular day as punishment for losing a fantasy football bet, this man had to spend 24 hours at a Waffle House in Chamblee, Georgia. The unfortunate (or fortunate) man was Michael Carsley.

The Atlanta resident lost a bet with friends with their virtual NFL league. After losing, he had the consequence of spending the entire day at the Waffle House on January 3 of this year. However, there was one way he could get out of the consequence.

RELATED: Police Officer Leaves A Pregnant Waitress A Note And $100 Tip And Her Dad Responds

For every waffle he ate, an hour would be deducted from his time. One waffle. One hour.

Michael used the opportunity to start a Facebook Livestream and fundraiser to show his waitress thanks. That Waffle House waitress was Mosammat Shumi.

His fundraising plan worked. After 18 waffles (18 hours), and only five hours had elapsed, Michael was free to leave.

He didn't do so without giving Mosammat a very generous tip totaling $1,040. The bill he had for just the food was $49.

“This is for you. I want to say thank you very much,” Michael told his waitress. She was floored.

"Really? Oh thank you very much!” she responded.

Waffle House Waitress Gets $1,000 Tip from Stranger Who Lost a Bet

They both left that day feeling blessed.

"Today was nothing short of incredible. I appreciate and am thankful for everyone's generosity,” he remarked online later. "We raised $1,040 for our server, and the experience of watching her reaction was priceless. Though the Waffle House punishment was absolutely miserable, it was well worth it in the end.”

A Waffle House spokesperson submitted a response to Michael's act of generosity.

“While we are sorry that Michael Carsley was unable to win his Fantasy Football league, we are honored that he chose to spend some time with us last Sunday. In doing so, he and his friends graciously turned a losing bet into something greater and extra special for our Associate, Mosammat Shumi, a beloved member of her restaurant team."

“We also appreciate the way Mr. Carsley and his friends chose to recognize Ms. Shumi, a 12-year Waffle House veteran, for her service by thoughtfully pooling funds together in order to serve her such an extremely generous tip.”

“We know it made her day, and it certainly made ours, so on behalf of our entire Waffle House Team, we thank them.”

“We do wish Mr. Carsley better luck with his next Fantasy Football team,” the memo continued. “But just in case, we'll be sure to keep the waffle bakers hot and ready.”

YOU MAY ALSO LIKE: Tiny ‘Strangers' Ring His Bell Every Day And It Brings A Lonely Man With Dementia So Much Joy

Michael didn't just make the best of his situation with a good attitude. He went above and beyond, and found a way to turn his own misfortune into a blessing for someone else.