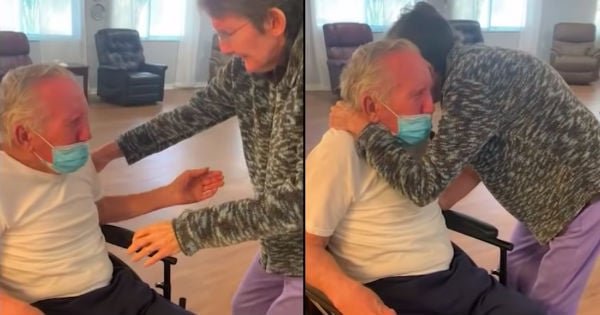 When a pregnant waitress at Waffle House and a pastor discovered they had a special connection, they knew God was at work. And the Lord had many more blessings on the way!

Some people believe in chance encounters. But Bishop Eusebio Phelps and Hannah Hill know chance has nothing to do with their paths crossing. It was all God!

Bishop Eusebio Phelps is a preacher at New Faith Christian Church in Stockbridge, Georgia. He met Hannah Hill, a pregnant waitress at Waffle House, after he decided to order the restaurant’s “All-Star special with bacon.”

When Eusebio arrived at the Waffle House to pick up his food, he and Hannah started chatting. The Pastor couldn’t help but notice that Hannah was expecting. And in that moment, the Holy Spirit prompted him to do something nice for the pregnant waitress at Waffle House.

“I was just really urged to give her the rest of the money that I had in my wallet,” the Pastor explained. “And so I gave her the $40 and I told her that I just wanted to be able to bless her so she could buy something for the baby.”

As the two continued discussing Hannah’s pregnancy with her second child, Eusebio realized they shared a special connection. Hannah’s unborn son’s name is Samuel. And the revelation hit Eusebio Phelps like a ton of bricks.

“We lost our son Samuel seven years ago in Atlanta,” he says. “It’s coming up on the anniversary.”

Right then, both Hannah and Eusebio knew this was a sign from above. Their paths had crossed for a reason!

Bishop Eusebio Phelps couldn’t stop thinking about Hannah Hill, even after giving her the $40 tip. He told his wife about the pregnant waitress at Waffle House and decided he wanted to try and raise more money to help her take care of her children.

Eusebio shared his divine encounter on Facebook, along with his desire to raise $1,000 for the mom.

And what God did even amazed the Bishop!

Folks started messaging Eusebio immediately with offers to help the pregnant waitress at Waffle House. And by the time he woke up the next morning, he’d already surpassed the $1,000 goal.

But the donations didn’t slow down.

Bishop Eusebio Phelps decided to show up at Waffle House to give Hannah the money and a surprise baby shower. The only problem was Hannah wasn’t there!

There was some confusion and it turns out the pregnant waitress wasn’t working at Waffle House that night. And as Hannah was on her way to the restaurant, the fundraiser kicked into overdrive.

Donations continued to pour in. And about $5,500 was raised just in the 40 minutes it took for Hannah Hill to arrive at Waffle House. When it was all said and done, Bishop Eusebio Phelps had raised $12,000 for Hannah and Samuel in less than 24 hours!

Things have been tough for the young mom. So the act of kindness from a complete stranger came as a huge shock and tremendous blessing to the pregnant waitress. The church has already offered to help with childcare, too.

And Eusebio went on to explain the reason he felt so compelled to do all this for Hannah.

“As a child of God, we have to be conscious of the voice of God and the mind of God. And I just feel like it was the right thing to do. Because at the end of the day, that’s showing love,” he said. “You know, in order to really be a Christian, you should make Christ visible. And in order to make Christ visible, you’ve got to show the love of God to people that you come in contact with… And it was her kindness… that touched my heart and I feel like the Lord really allowed our paths to cross.”

What’s amazing is Hannah never shared about her struggles with Bishop Eusebio Phelps or anyone else. But lately, she’d been turning to prayer.

So, this flood of support was truly a divine inspiration. And it’s made a huge impact on the Waffle House waitress.

YOU MAY ALSO LIKE: Pizza Hut Waitress Gets A 10,000 Dollar Tip When Family Decides To Use Personal Tragedy For Good

“God knew. He felt it on his heart,” she said. “Makes me wanna get back in church.”

“Beloved, let us love one another, for love is of God; and everyone who loves is born of God, and knows God.” 1 John 4:7