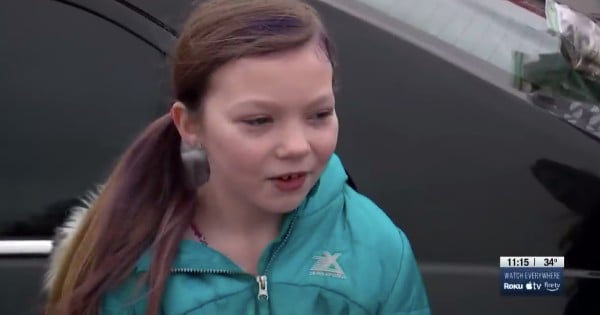 One police officer went out of his way to leave a pregnant waitress a note and a generous tip. And the waitress's father took to social media to thank the kind man.

Courtney English was pregnant with a baby girl when a South Jersey police officer stopped by the diner she was working at. He was served his lunch and then left to go about his day, but what Courtney found after he left was a $100 tip on his less than $9.00 bill. She was shocked and overjoyed!

Courtney's father was also pleased when he heard the news and shared what had happened on his Facebook page.

"You always hear about how bad the police are, how they treated you like dirt, how they are on a power trip. Yes, I am sure there are some bad apples, but most of them are just doing their jobs. They deal with the worst of society every day and have to keep going back every day and deal with it all over again. They risk their lives each day just to do their job of trying to enforce the laws that they didn’t make," he writes.

"They are human and do many good things every day that most people will never know about. Like giving the young mother a warning instead of a ticket, because they know she is struggling. Or locking up an abusive spouse and giving the abused information to get out of the relationship safely. Or just being a nice person in a stressful and upsetting situation. They are people, they have feelings, and they have jobs to do. Sometimes they may not like what they have to do, but they do it without question."

He continues: "Most of the good stuff they do you will never hear about. They don’t do it for glory or recognition, they do it because they are good people. And I wrote this post to point out one such act. My daughter is a waitress at a local diner. She is also 7 months pregnant and working still to save as much money as she can. This will be her first child and she is so excited. She is always cheerful at work, so she has a lot of regulars. But this was not one of them."

"Yesterday she was working the lunch shift when a Voorhees police officer came in. He was pleasant and had his lunch by himself and asked for the check. My daughter gave him his check and moved on to wait other tables. The officer went to the cashier and paid his bill and left a note on the bill for my daughter. This officer, who I am sure works his butt off for his paycheck, left her a $100 tip on a $9.00 ticket and the note simply said, ‘Enjoy your first, you will never forget it.'"

What an incredibly sweet gesture! And this act of kindness not only touched the waitress but her father as well.

"What a wonderful person to not only leave a very generous tip, but a lovely message. I don’t know you, Mr. Police Officer, but you made my little girl cry and made her year. Thank you. I always had the utmost respect for officers, but you went above and beyond. Not just an officer, but a beautiful human being. God Bless."

You always hear about how Bad the Police are, How They treated you like dirt, how they are on a Power Trip, Yes I am…

It's stories like this that make you smile and want to pay it forward. God bless that kind police officer, and may we all look for ways to bless those around us in our day to day lives!

YOU MAY ALSO LIKE: She Sensed Something Was Wrong And The Quick-Thinking Waitress Saved A Boy