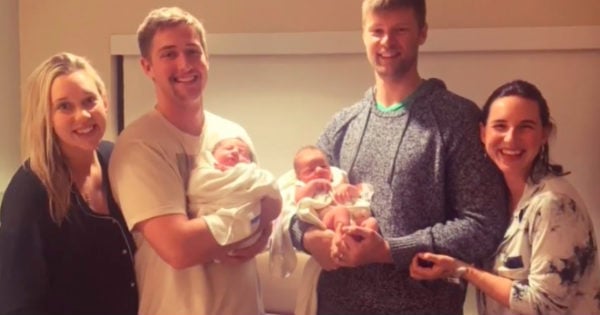 Actress Christina Applegate heard of these two sisters in dire need, and then she championed to save their lives.

Little girls should be in school, going to dance class, and playing outside. But sisters, Kimora, 11, and Kylie Van Sciver, 9, don't have that luxury. The only thing they want is to live pain-free and not be in a hospital bed thanks to the complications of living with Sickle Cell anemia.

RELATED: Carrie Underwood Recalls Losing Baby After Baby And How She Wrestled With God

When a friend from Christina's daughter’s school told her about “the most amazing kids,” Kimora and Kylie, Christina knew she could raise awareness about the impact of being a bone marrow donor. You see, Christina has done this before.

Years ago, she went through the process to find out if she could be a match for two brothers who suffered from a genetic blood disorder. Even though she wasn't a match, her actions caused others to take action and a woman in Germany learned she was a match.

Now Christina is raising awareness about Sickle Cell Anemia in the middle of a pandemic. The pandemic has slowed down efforts to find that possible match, but now people can register through a virtual donor drive, where a kit is mailed to your home for free, a quick cheek swab, send it back and a match may be found.

About one in every 365 Black children is born with the disease which creates a lack of healthy red blood cells to keep oxygen moving throughout the body. This can result in organ damage, blindness, delayed growth, and even death of muscle tissue and sometimes death. But the heartbreaking impact can be stopped with a successful bone marrow transplant. Because the girls are sisters, the same donor would work for both of them.

“I really want to not only bring awareness to DKMS, but also, we want to save these girls’ lives,” she said. “I can’t imagine as a mother, having both your daughters with this disorder, and they can’t find a match. The more we can get people to do this, then the bigger chance that they have of surviving.”

Sisters Suffer From The Pain Of Sickle Cell Anemia

Their mother Destiny said, “I feel like nothing compares to the suffering that Kimora and Kylie have endured through my life, and seeing it as a mother firsthand. Having a front seat to it is the worst thing you can imagine.” For Kimora, a successful transplant would put an end to the joint pain and bone necrosis she’s been experiencing.

“Sometimes it can feel like someone’s just stabbing you over and over in your leg,” says the aspiring swimmer. “It’s not so fun. It really hurts a lot. Words can’t really express how much pain it is," she said.

YOU MAY ALSO LIKE: Tom Selleck Leaves A $2,020 Tip And Heartfelt Note After A Blue Bloods Co-Star Inspired Him

But it's people like Christina who bless others with their actions. When Destiny learned of Christina's efforts, “I thought, ‘Wow, look at God,'” she said. "Having her involved is going to highlight those thoughts in people’s minds to do something, to make a difference.”

"Do not neglect to do good and to share what you have, for such sacrifices are pleasing to God." Hebrews 13:6

WATCH: Actress Christina Applegate Hears Of 2 Sisters In Dire Need, Then Champions To Save Their Lives