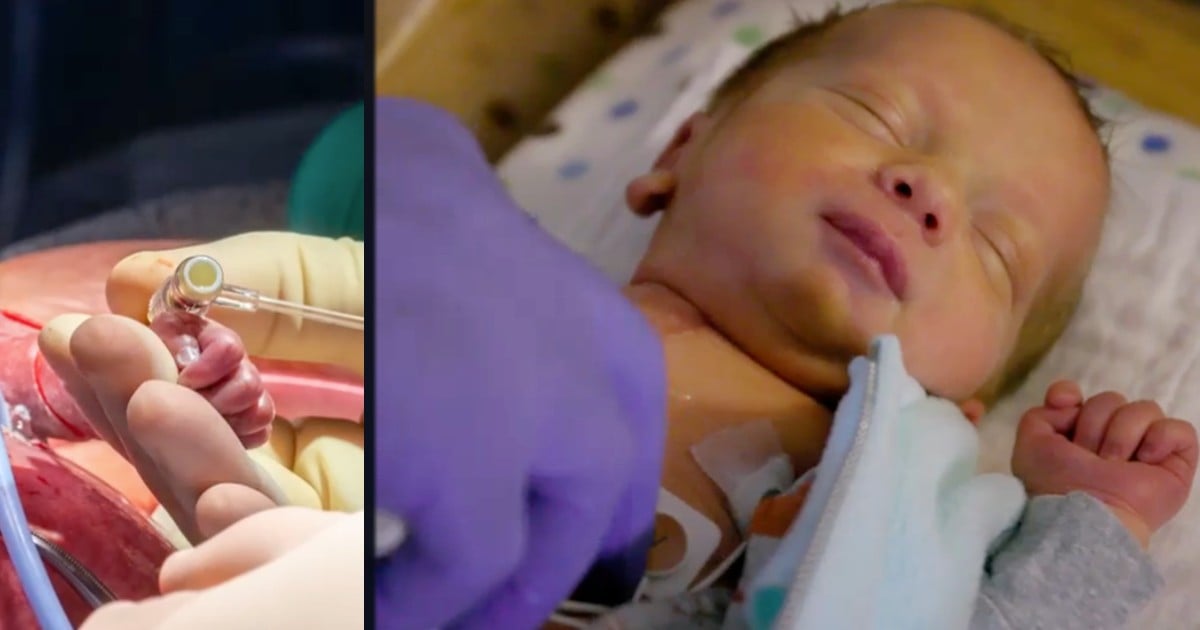 Unborn Baby Removed From Womb To Receive Life-Saving Surgery, Then Doctors Put Him Back
Read Article »

Lauren and Steve Banks never would have chosen to have their baby born at a gas station between pumps four and five. But after the hospital refused to admit the pregnant mom, that’s exactly what happened.

When contractions hit at 39-weeks pregnant, Lauren Banks knew it was go time. So she and her husband, Steve, did exactly what you’d expect someone in their situation to do. They headed to the hospital.

"Without a doubt, she was in labor," Steve recalled. "Anybody could tell that."

RELATED: Woman Realizes She's Going To Give Birth In Gas Station Bathroom So She Starts Praying

But Steve and Lauren didn’t get the reception they were expecting. They say the hospital turned them away.

"She was denied admittance to labor and delivery a couple of times, and she was in obvious pain and labor,” Steve said.

According to the couple, a doctor evaluated Lauren but refused to admit her because she only measured four centimeters dilated. They say the doctor said they wouldn’t consider admittance unless she was at five centimeters.

"At this point, I am bawling my eyes out on all fours on the bed," Lauren explained.

Even so, the couple says the hospital still made them leave.

"He said he was sorry I was in pain, but I was giving him no medical reason to keep me," Lauren recalled the doctor telling her. "He said, ‘Your blood pressure's fine, I can't keep you due to pain.'"

The shocked couple turned around and drove back home. But about 30 minutes after their return, Lauren’s water broke.

A neighbor came over to watch the couple’s daughters and Lauren and Steve Banks rushed back to the hospital. However, on the way, it soon became clear there wouldn’t be enough time. And as a result, Baby Banks was born at the gas station!

"I watched my wife give birth to my son right there in the parking lot," Steve says.

RELATED: Woman Goes Into Labor At Gas Station, Then God Sends An Angel

Steve Banks called 911 and pulled into the gas station parking lot. Lauren gave birth in the car, right between pumps four and five. And it was a terrifying ordeal.

“He came out and he was purple, and he wasn't making a lot of noise,” Steve recalled. “I was concerned on top of everything else going on.”

Thankfully, God sent just the right people at the right time. An EMS team pulled in just as the baby was being born at the gas station.

"They came up and saw what was happening and jumped into action," said Steve. "I'm sure that they are a large part of the reason to why everything went as smoothly as it did and there were no complications. I can't thank them enough."

Lauren and Steve Banks are overjoyed with their newest addition — Truett. And they’re incredibly grateful he’s healthy and safe, thank the Lord. But they remain baffled over why their baby had to be born at a gas station rather than in the hospital.

"Someone just please explain to me why this happened," Steve said.

"My baby deserved better than that," Lauren remarked. "So many things could've happened."

Though the couple currently has a difficult time reliving the story of how their baby was born at the gas station, they plan on laughing about it later when Truett is older.

"I think we'll find the joy in it when we explain it to him, so he never has to live through that stress," Lauren said.

YOU MAY ALSO LIKE: Woman Went to Store for Groceries And Then Left with a Newborn

The hospital has said it “cannot legally comment on patient matters or concerns.” But like the Banks family, we are just grateful that God kept this little one safe.

“For this child I prayed; and the LORD has given me my petition which I asked of him” 1 Samuel 1:27

WATCH: Baby Born At Hospital After Pregnant Mom Is Turned Away