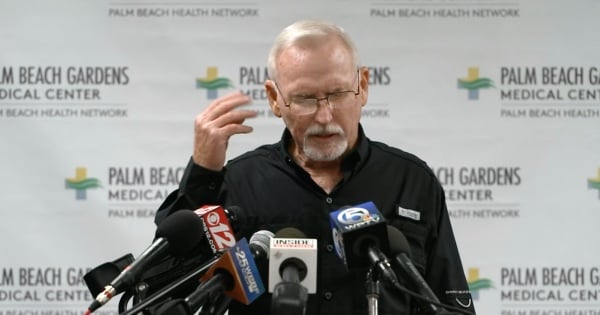 Brittany and Daniel Brooker were both widowed at young ages and both had small children to raise. But God led them through their grief to one day find love again as the Brooker Bunch!

At weddings, a couple vows to love one another for “as long as they both shall live.” And most of us assume that life will span multiple decades.

Sadly, though, that’s not always the case. Sometimes lives are cut short. And that was the case for the first marriages of Brittany and Daniel Brooker.

Doctors diagnosed Daniel’s wife Lyndsie with cancer at just 19 years old. Lyndsie fought bravely and beat the disease then and again at 21 years old. During that time, Daniel and Lyndsie married and adopted two children.

But years later, Lyndsie’s cancer came back out of nowhere. And this time, at 28 years old in 2015, she found her healing in Heaven.

“One of the hardest things that month was picking up my phone to text her out of habit. Calling her phone out of habit and stopping mid-dial or mid-ring and knowing I never will hear her voice again,” Daniel recalled.

The loss left Daniel Brooker devastated and questioning his future now that the love of his life was gone. But God never left Daniel’s side and assured him there were blessings to come.

“God spoke to me so clearly,” Daniel says. “He said, ‘That connection that you desire with Lyndsie and that you want — you can have it. But it’s through Me. And what she’s doing right now is worshipping Me. Why don’t you try that?'”

Daniel decided then to surrender his grief to God.

In 2015, before Brittany ever knew Daniel Brooker, she too was experiencing the grief of losing a spouse.

Brittany and Patrick were each other’s first relationship. The pair wed in 2011. Brittany recalls how the two promised to be faithful to one another “until Christ calls me home.”

By 2015, the couple had three kids under the age of three. Life was hectic but extremely blessed. Then, one day, Brittany received a call from Patrick’s boss that changed everything.

RELATED: Wife Dies Hours After Giving Birth And Husband's Gut Tells Him To Check Her Blog

Patrick suffered a fall at work and when Brittany arrived at the hospital, she could tell from everyone’s faces the news wasn’t good.

“I’m so sorry Brittany, but Patrick died,” they told her. “His heart just stopped beating.”

At the age of 25 and with three boys under the age of three, Brittany became a widow. But just like with Daniel Brooker, the Lord was with Brittany in her time of grief, too.

“I also felt Jesus just sitting with me and saying, ‘I feel your pain. It’s going to be ok. I’m going to walk you through this’,” Brittany recalls.

Both Brittany and Daniel Brooker leaned into God during their darkest moments. And He carried them through. And when their hearts were ready, God brought the widower and widow together to form the Brooker Bunch!

God has merged their pasts into a new and bright future. And the Brooker Bunch got even bigger after Brittany and Daniel Brooker welcomed a daughter together, Laurel Grace.

Though their story includes plenty of tears and heartache, Brittany and Daniel share it to show the goodness and faithfulness of God through all seasons of our lives. And even in the toughest times, God is weaving together something beautiful.

“God is not wasting your pain, He’s not wasting anything you’re walking through,” Daniel says. “He sees you and He cares and He wants you to live out a life that’s full of joy, full of love, and passion and pursuit. And we have to make a decision that no matter what we walk through, we have to trust and believe that that is still waiting for us, that is still ahead.”

YOU MAY ALSO LIKE: Young Widower And Father Of 7 Breaks Down When A Stranger Walks Up And Hands Over $10k

Brittany continues, saying, “When you feel like your life is over and there is no hope ahead. And you feel like you’re drowning in pain, just reach up to the hand that is trying to pull you out, which is Jesus… Keep hoping, even when it hurts.”