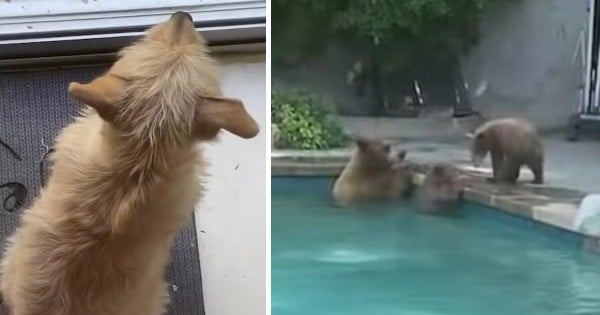 One cat saves a woman's life after his persistent meowing leads others to the spot where she had fallen 70 feet into a ravine!

Piran is a black cat in England, and his 83-year-old owner recently went missing. But thanks to Piran, she was found by a neighbor. She had fallen 70 feet through barbed wire, down a bank, and into a stream.

RELATED: Brutiss The Disabled Cat Won't Let Anything Stand In The Way Of Living Her Best Life

Tamara Longmuir is neighbors with the 83-year-old woman. And she went looking for her as soon as she heard that she was missing. “I went off in my truck to search our farm and fields but there was no sign of her,” she said.

That's when Tamara noticed the black cat sitting at a gate to one of the fields. And he was persistently meowing.

“This was unusual. The cat is very attached to her, and he was going back and forth in the gateway and meowing, so I decided to go and search the maize field," Tamara shared. "I walked right around to the bottom of the field, calling the lady’s name. My cows could hear me calling and were mooing back. I was hoping they would go quiet so I could hear. Just as I was going to go off the path and start going through the crop, I heard a very faint response to my calling. I then quickly realized my neighbor was down the 70ft ravine. She had gone through the barbed wire and was laying in the stream. We think she had been in there for hours.”

Once the elderly woman was found, emergency services arrived, and she was taken to a hospital. “Whilst the lady concerned is still currently receiving care, she is in good spirits and is being well looked after,” writes the police department that attended to the emergency on their Facebook page.

YOU MAY ALSO LIKE: 2 Girls Were Trapped In A Burning Apartment So Good Samaritans Formed A Human Ladder

Thank goodness for Piran the cat! “Without the cat waiting at the gate to that field, it could have been hours later that I or anyone else would have checked in there,” Tamara said.

Our pets truly look out for us. And because of Piran's actions, his owner's life was saved!