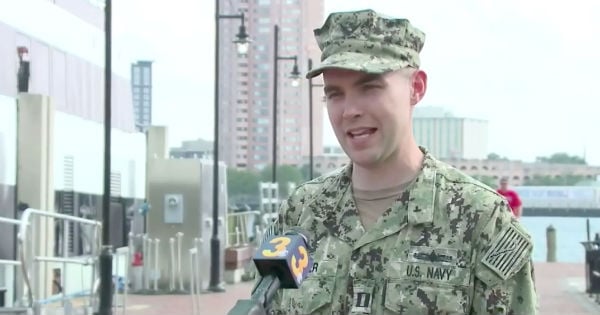 After 84-year-old Ron Williams slipped and fell while home alone, his cat saves his life. And the Army veteran is still around to share the inspiring animal story thanks to his furry angel named Fluffy!

One day, a friend stopped by with a special surprise for Ron Williams — a male cat named Fluffy.

RELATED: Cat Called A Hero By Police After Dialing 911 To Save His Human

"I looked at him and hey, I just fell in love with him," Ron said.

The 84-year-old Army veteran and fluffy cat hit it off immediately. But no one realized at the time Fluffy would be more than just a beloved companion. He’d become Ron’s hero, too, after the heroic cat saves a life!

A Terrible Fall At Home

On the day Ron Williams fell while getting out of the shower, it was the perfect storm of calamities to make for a possibly very tragic ending.

For starters, the 84-year-old was all alone at home except for his faithful companion, Fluffy. When he fell, he landed in a position where he couldn’t move at all. He’d also left his life alert device in the other room on the charger. And while Ron’s cell phone was in the bathroom with him, it was out of reach on the counter.

RELATED: Rescue Cat Saves His Human From The Gatlinburg Wildfires

"My arm was pinned under me, and the hours kept going by," he explained.

Ron Williams had no choice but to lay in agony on the floor, hoping and praying someone would find him before it was too late.

Thankfully, though, God already had a special angel in place for that. He’d brought Ron and Fluffy together so the cat could save the life of his injured owner!

Once Fluffy came to live with Ron, the 84-year-old veteran would spend much of his day narrating for the cat what he was doing.

"The phone would ring, and I would say ‘ring-a-ding'," he explained.

What Ron didn’t realize was that God was already laying the groundwork for the day he would fall.

Ron laid on the bathroom floor from 8 am until midnight. Thankfully, though, he had Fluffy in the room to keep him company. But the cat would actually go on to save his life, too!

RELATED: Abandoned Baby Left To Die Until God Sent a Heroic Cat to Save Him

As the prospect of someone finding him grew grimmer and grimmer, the elderly man turned to Fluffy in desperation.

“I said ‘ring-a-ding Fluffy, you're my only hope’,” Ron recalls. "And he was. It wasn't even five minutes later I felt something hit my hand. And I'm here because of it."

That “something” was Ron’s cell phone. From all the times Ron had told Fluffy “ring-a-ding” when he was receiving a phone call, he’d connected that phrase to the phone for Fluffy. And when Ron spoke those words in his desperate time of need, the brilliant cat brought him his phone so he could call for help just in time.

"I relive it a million times,” the 84-year-old says. “What if he wouldn't have been in there with me? I'd be dead today,"

Thanks to his pet’s actions, Ron has only a few minor bumps and bruises after the fall. And the two have an even closer bond than before.

God gave Ron Williams just the cat he would need to one day save his life. This furry hero is nothing short of a miracle!