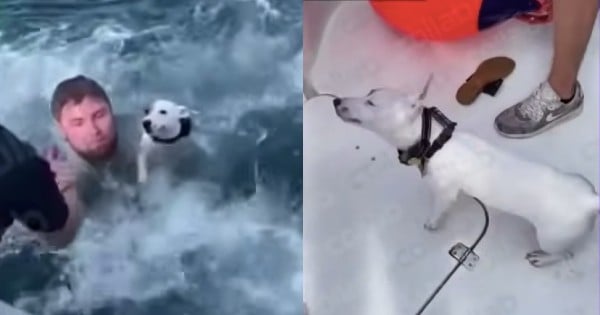 If a Texan is headed out of town, it's likely he's packing a pair of cowboy boots, but you wouldn't expect there to be a Chihuahua in his luggage!

Jared and Kristi Owens got busted for that very thing when their pet pooch, Icky, popped out of Jared's boot during a quick suitcase shuffle.

RELATED: Chihuahua Was Going To Be Killed Until Actor Jean Claude Van Damme Fought To Save Her

While checking in at the Lubbock Airport, Jared and Kristi's bag weighed in at about 5.5 pounds overweight. They must have done some precise packing because their luggage overage is pretty close to the weight of an average Chihuahua-between 4 and 6 pounds.

So, when they opened their suitcase to make a few last-minute adjustments, Icky appeared. She’d apparently "burrowed" her way into Jared's boot before being zipped up inside.

While this particular snuggle spot was new, Jared and Kristi have seen this behavior before. "Icky's the burrower, that's what she does. She burrows in clothes, she burrows in, obviously suitcases now," stated Jared.

Chihuahuas aren't necessarily known for a docile and quiet temperament. They are loyal and loving, but they are also often feisty and yappy. It's amazing that Icky hadn't already made her presence known from inside her parents' bag!

RELATED: Inseparable Pit Bull And Chihuahua Landed In Shelter And Refused To Leave Each Other's Side

Hopefully, had she not been ousted before boarding, she would have before take-off. It might not have ended well had the tiny Chihuahua remained stowed in the luggage throughout the flight.

Jared and Kristi are very appreciative to Southwest Airlines Employee Cathy Cook. Cathy graciously offered to care for Icky while the Owenses were away. Talk about going above and beyond!

However, the couple has family close by, and they were able to grab Icky at the airport and watch her while Mom and Dad were away.

Folks expect to come home from Las Vegas with a few dandy stories. Ususally, those stories are either about what they saw or what they did. But, Jared and Kristi got their fun story before ever getting "wheels up," thanks to the Chihuahua hiding in their luggage!

Icky is a cutie, and, obviously, devoted to her owners. Now, how in the world did she get that name? That may be another story for another day!

YOU MAY ALSO LIKE: Hilarious Description Of Prancer The Chihuahua In Brutally Honest Adoption Ad Goes Viral

"I thank Christ Jesus our Lord, who has given me strength, that he considered me trustworthy, appointing me to his service." 1 Timothy 1:12