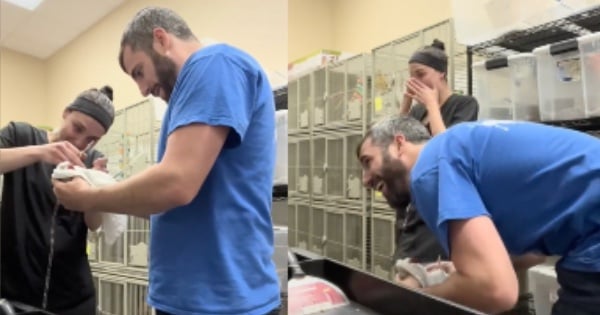 One dog detected a seizure after he was adopted and found his forever home. He is not only a companion, but a hero!

RELATED: Bike Riders Spot Terrified Pup And Rally Together Until Dog Is Rescued From Bridge Beam

A dog named Ranger had spent 7 years of his life on the streets of Texas. Mary Cormier, who had rescued several dogs before, had gotten a call about a dog who was on the side of the road with a broken leg. That's when she met Ranger. She realized that he had been hit by a car and had been homeless for the last 7 years.

“He made it through every winter, every blistering Texas heat for seven years,” Mary said.

With the help of donations, Mary was able to get the surgery Ranger needed and took him to her home to rest and heal. And he really enjoyed spending most of his time indoors.

“Some dogs are just good. There’s nothing negative I could say about him. This is a good dog,” Mary shared. “Ranger was meant for better. He’s served his time. I felt like he needed to be an indoor dog.”

After going through several adoption applications, Mary was able to find the perfect match for Ranger's forever home. And his new owner's name was Judy Okert.

Recently, Ranger became Judy's hero when he alerted her that her granddaughter was having a seizure.

“I don’t know what we would’ve done without him,” Judy said.

Ranger ended up scratching on the granddaughter's door while whimpering loudly. Then he ran to get Judy's attention. Because of his actions, Judy's granddaughter was saved!

YOU MAY ALSO LIKE: A Struggling Single Mom Became The Inventor Of Liquid Paper And It Changed Everything