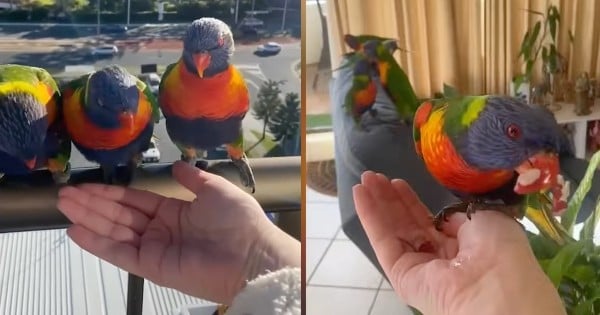 A recent study found that a hormone called oxytocin is released when dogs and their best hoomans are reunited after being away or lost. Oxytocin happens to be nicknamed the "love hormone."

How did this happen? A researcher Takefumi Kikusui of the Azabu University in Japan, who happens to adore his dogs, noticed that when she had puppies, seemed to be crying tears of joy, especially when she was nursing her puppies. But she didn't cry tears the way humans do.

Curious about what it meant, he decided to research the deep bond between humans and their beloved pets. He went a step further to turn what he noticed into a study called the “reunification experiment."

“We found that dogs shed tears associated with positive emotions. We also made the discovery of oxytocin as a possible mechanism underlying it," Takefumi said.

The experiment proves what dog lovers have known all this time, and it's pawsitively accurate. Dogs do love and recognize their owners.

RELATED: Woman Looking For a New Pet Gets Reunited With Lost Dog She Thought Was Gone Forever

In fact, dogs cry tears of joy when they are reunited with their owners after being separated. It goes to prove there is indeed a strong emotional bond.

God certainly knew what he was doing when he created man's best friend. They are strong enough to pull sleds but gentle enough to lead the blind. They're obedient enough to stay where we need them to but brave enough to jump into action and save lives.

And now we have research that proves they do develop deep bonds with us. The next time your dog seems to be jumping for joy and seems to be misty-eyed, you can take comfort in knowing your Rover dog really, truly, adores you!

YOU MAY ALSO LIKE: Woman Sees Dog Looking Sad As He Stares Out to Sea & Then Uncovers His Heartbreaking Story

"Tears of joy will stream down their faces, and I will lead them home with great care," Jeremiah 31:9.

WATCH: Dogs Cry When Reunited With Their Humans