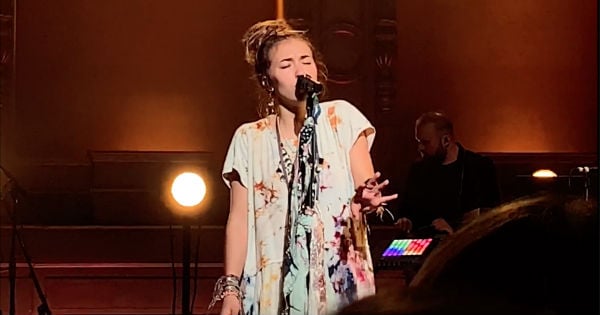 Elvis Presley is known as the ‘King of Rock and Roll' and was one of rock music's dominant performers from the mid-1950s until his death. But he sang many gospel hymns throughout his career, one of them being ‘Crying in the Chapel.'

"You saw me crying in the chapel

The tears I shed were tears of joy

I know the meaning of contentment

I am happy with the Lord

Just a plain and simple chapel

Where all good people go to pray

I prayed the Lord that I’ll grow stronger

As I live from day to day"

The hymn ‘Crying in the Chapel' was written by Artie Glen for his son Darrell to sing. Darrell recorded it with his father's band, Rhythm Riders, in 1953. The song became a local hit and then went nationwide.

RELATED: ‘Peace in the Valley’ Elvis Presley Story Behind Lyrics

On October 31, 1960, Elvis Presley recorded his version of the song and planned to put it on his gospel record, His Hand in Mine. Elvis used The Jordanaires as background vocals on the ‘Crying in the Chapel' recording, but after three takes, neither party was satisfied with the outcome. The decided to shelf the recording and move on.

Elvis Releases Song 5 Years After It Was Recorded

It wasn't until April 6, 1965 that the ‘Crying in the Chapel' recording was released as a special Easter single for Elvis. And even though the song was held back from release for five years, it became Elvis' most successful gospel song, quickly selling millions of copies.

The song stood out among current pop songs with its restrained, old-fashioned sound. Something that may not have happened had it been released half a decade earlier. The melody is beautifully "plain and simple" as the church in the song. Its strip-down production allows for Elvis' heartfelt performance to shine through.

YOU MAY ALSO LIKE: Elvis Presley | ‘Take My Hand, Precious Lord’ – Story Behind Lyrics

This nostalgic hymn reminds us of the beauty there is when gathering with those of one accord in a simple chapel. It's a place where we can go to find peace and gain strength when we are weary. What a blessing to know that God is always near to us and He can help us overcome whatever trails we may face. May you be reminded of that today while listening to this song.