Sometimes you have to take the good wherever you can find it. And that’s just what Jeff Hill did when he and his friend rescued a horse trapped in a pool after the deadly California Camp Fire.

The 2018 Northern California Camp Fire has been reported as the deadliest wildfire in the state's history. Thousands have lost everything. Many have lost their lives. And with so many horrifying accounts from the devastating fire, many are choosing to focus on the positive stories of hope. Stories like Jeff Hill’s.

Grim Search Leads To Horse Trapped In A Pool

Jeff Hill and his family lost everything to the fire. But he knows they’re lucky to have survived. And when Jeff headed out on a search mission with his friend Geoff Sheldon, he feared wouldn’t be able to say the same for his father.

Sheldon’s dad had opted to stay behind when the evacuations began. And as the two men traveled into the fire-ravaged area, they feared it would prove to be a deadly mistake.

“We were up there to check on his dad, and we were ultimately thinking we were going to find the remains of his dad,” Jeff Hill explained.

But when they got to the father’s home, they found something else entirely. A shivering horse trapped in a pool! And the sight was heartbreaking.

“We stumbled upon this girl who had given up and had the look of defeat in her eyes. There's no telling how long she was there but she was shivering uncontrollably and ultimately lost her fight,” Jeff said.

It later turns out the trapped creature was actually a mule. But either way, the poor animal survived the Camp Fire flames, only to find herself stuck in the pool with no way out. 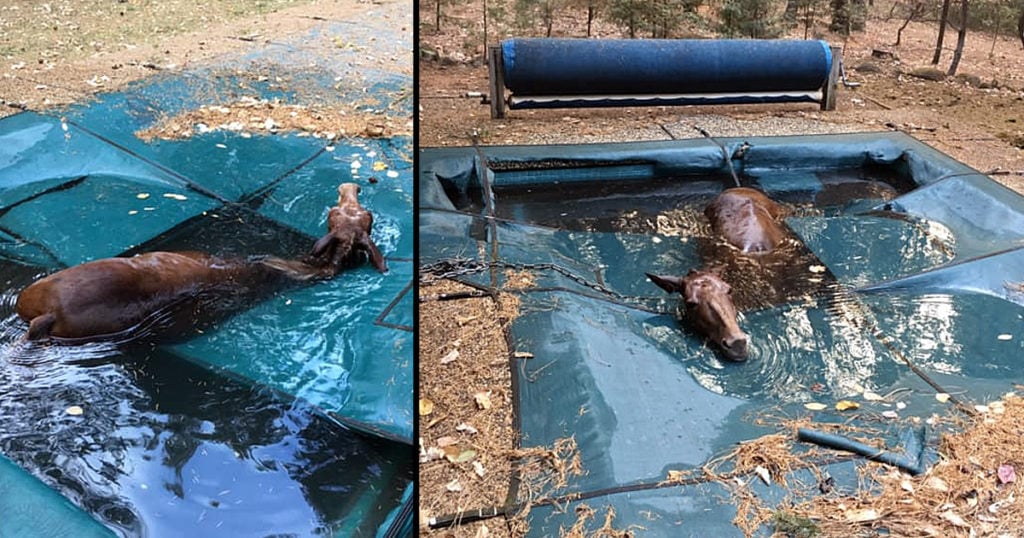 The pool cover tangled around the mule’s legs and body, which actually helped keep her from drowning. But after struggling for so long, she was worn out and probably sure she would die.

But then God brought these two men to her rescue!

Working together, Jeff and his friend managed to get the poor mule out of the pool. They pulled the pool cover to the shallow end of the pool until the mule could stand up. Jeff used a chain as a leash to gently help guide the mule up the stairs and out of the water.

Once free, the mule found a special way to show her rescuers her gratitude.

“She came over and let us love on her for a little bit, then after about a minute, she turned around and walked away, and as she was walking away she kinda looked back at us,” Jeff recalled. “I felt like it was kind of a reassurance, you know, a thank you. She was letting us know that it will be OK.”

The incredible animal rescue served as a silver lining after so much death and destruction.

“Among all the sadness I had a glimpse of happiness today,” Jeff said after the rescue.

And there was more good news. Not only was Geoff’s dad’s house one of the few to survive the fire, but his father also left the area in time and was safe.

Our prayers go out to Jeff and all of those facing the impact of the California Camp Fire. Let’s keep celebrating those glimmers of hope, just as Jeff did!

YOU MAY ALSO LIKE: Officer Finds Wife's Lost Ring After Home Burns Down In California Wildfire