As wildfire flames closed in around them, California nurse Tamara Ferguson truly thought she was going to die. In fact, she started calling loved ones to say goodbye. Here’s the incredible story of how she and her patients miraculously survived.

Northern California’s Camp Fire of 2018 has been reported as the deadliest wildfire in the state’s history. Terrifying accounts of trying to escape the flames poured in, such as those in the video above. From a frightened mother and daughter trapped in their vehicle to nurse Nichole Jolly who’s pants actually caught on fire as she ran from the flames. It’s one of those unfathomable situations you hope to never experience firsthand.

Another harrowing account getting plenty of attention is a Facebook post from another California nurse Tamara Ferguson. And in the midst of so much horror, seeing strangers come together for a common good is truly beautiful. 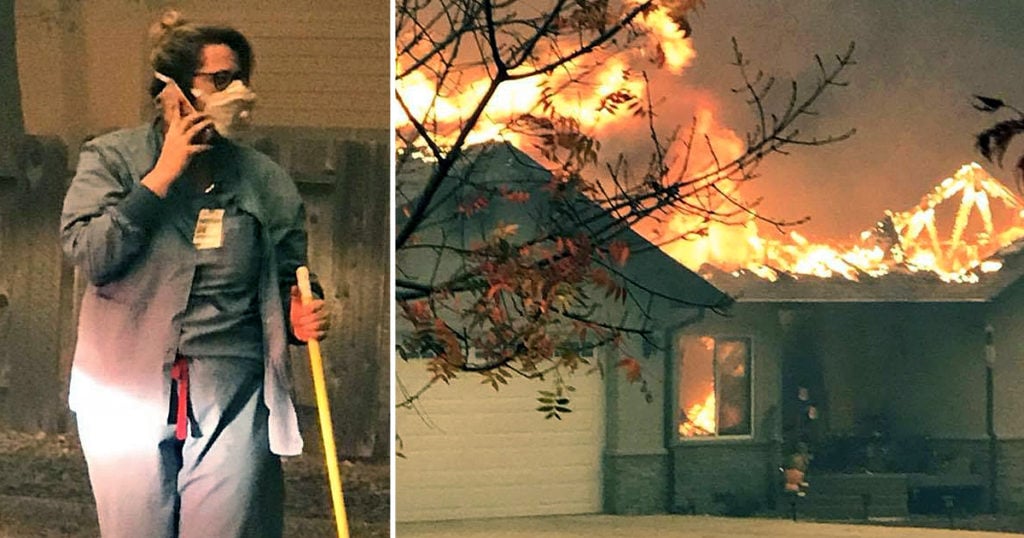 Tamara Ferguson works as a labor and delivery nurse at Adventist Health Feather River in Paradise, California, one of the areas impacted by the raging wildfire. And when she turned up for her last shift of the week, she wound up fighting to save her own life, as well as the lives of her patients.

Tamara’s shift started just like any other day. But as she was tending to a mother and baby, she noticed an orange glow outside.

“I walked outside with co-workers and watched ash fall like snow and a huge growing cloud of fire,” she says.

The nurse kept working, but within an hour, she was going room-to-room helping parents wrap up their babies for a hospital evacuation. A steady stream of patients and nurses headed out of the ER and lined up as staff members loaded everyone they could into their personal vehicles.

“Ambulances, the sheriff, and police lined up and helped doctors, nurses, and all staff load patients from beds and wheelchairs into cars,” Tamara recalled.

Tamara and her co-worker, Chrissy, hopped into an ambulance with a very critical patient. The plan was to head to the nearby Enloe Medical Center in Chico. But after traveling about a mile, traffic slowed to a stop.

RELATED: Rescue Cat Saves His Human From The Gatlinburg Wildfires

They got word over the radio that the ambulance in front of them was on fire. So their ambulance pulled into the driveway of a nearby home. And the terror of the situation really started setting in.

“I looked around as fire surrounded us, transformers were blowing up and the winds were sooo fierce,” Tamara wrote on Facebook. “This is when I looked at Chrissy and realized we might not make it out at alive.”

After Tamara and her fellow co-workers took shelter with their patients in the house’s garage, she started making desperate phone calls to her loved ones.

“I immediately thought of my kids, and the man I love so much… my family, and I lost it,” Tamara said. “I called them all. And between sobs, I said how very much I loved them, how sorry I was for any way that I let them down or made mistakes, and asked my oldest daughters to please make sure their younger siblings were taken care of and knew how much I loved them.”

She called her boyfriend, a police officer, to say farewell.

"Babe, there's no way I'm going to survive this,” Tamara told him.

And she wasn’t alone in that thought. Other co-workers started calling loved ones and saying their final goodbyes, too.

But then Tamara saw something that changed everything. She spotted a paramedic, EMT, and pediatrician filling water buckets and spraying the house. And in just a matter of minutes, they all united to fight the fire.

“Sure we had our breakdown and felt hopeless. And then our jobs and why we do what we do came back to reality,” California nurse Tamara Ferguson explained. “WE need to save our patients and ourselves. If we were going to die today, we would at least do it protecting others and do everything we can to live. And we did!”

Tamara and what she describes as an “awesome team of mostly strangers,” worked tirelessly to keep the flames at bay until they were able to move again.

The group headed back to the Paradise hospital and again they rushed to load the patients (and themselves) into waiting sheriff's vans, police cars, and ambulances. This time, the vehicles succeeded in fleeing to be from the burning hospital once and for all.

And as Tamara prepared for evacuation, she looked out at the flames and destruction, marveling at her close call.

“I honestly couldn't believe I was alive,” Tamara said. “That I would see my family, kids, and boyfriend again. I called them and told them I made it."

It was a miracle! With so much lost, the heroic efforts of Tamara and those by her side remind us of what’s truly important. Let’s all hug our loved ones a little tighter today and say a prayer for those impacted by the wildfires.