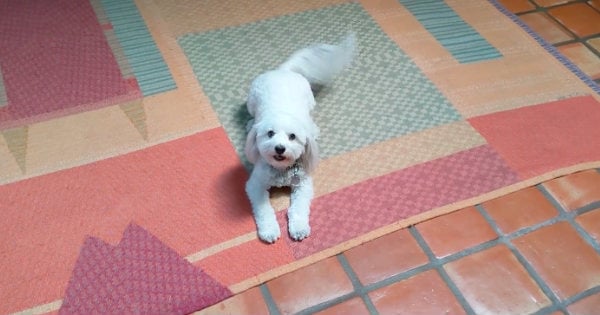 Aaron Wallman lets the camera roll as Millie the husky wakes his sleeping baby Parker. And it’s one of the sweetest things to watch!

2-year-old Parker and the sweet husky Millie have been pals since the day Aaron and Kieghley brought him home from the hospital.

RELATED: Little Girl And Her Husky Pal Share A Language All Their Own And It's Too Cute To Miss

Parker, who is from Manchester, England, has a human brother named Kade and two other husky siblings named Rupert and Lola. But Parker and Millie share an especially close bond.

This special bond has become a secret weapon for dad Aaron Wallman. Apparently, Parker can get a bit grumpy when it comes time to wake up. So, the clever dad lets the husky be the one to wake the sleeping baby!

“If we bring Millie in he wakes up in a total different mood,” Aaron explains. “It's so beautiful to see his reaction.”

In one video of the pair, Little Parker is completely zonked out as Aaron lets Millie into the room. The dog ever so gently wakes the sleeping toddler with loving nuzzles and kisses. As little Parker wakes, he smiles and strokes his furry pal.

But while Millie may be there to help Aaron wake Parker up, the dad has to keep a watchful eye on these two. If it weren’t for Aaron, it looks like the cute pair would simply snuggle up together for some more snoozing!

The sweet interaction between Parker and Millie is something Aaron often films. In fact, one of the videos where the sweet husky wakes the sleeping baby has more than 5 million views!

RELATED: Dog Scared Of Thunderstorm Gets Comforted By His Toddler Bestie And Folks Can't Handle It

Parker and Millie are such good friends that Parker’s parents put together a special tribute video on their son’s second birthday. It’s a montage of clips of Parker and Millie together, starting with the first time Aaron and Kieghley brought Parker home as an infant.

It was “love at first sniff” for Millie! And the special bond she shares with Parker just goes to show how dogs earned the nickname “man’s best friend.”

These two clearly have many years of love ahead of them. And watching them interact is sure to bring a smile even on the darkest day.

YOU MAY ALSO LIKE: Husky Wakes A Sleeping Pig So They Can Play

While Millie and Parker have plenty of adventures ahead of them, it’s always especially touching to watch them snuggle up together for a peaceful snooze!

WATCH: Husky Refuses To Get Out Of The Bed Of Sleeping Baby