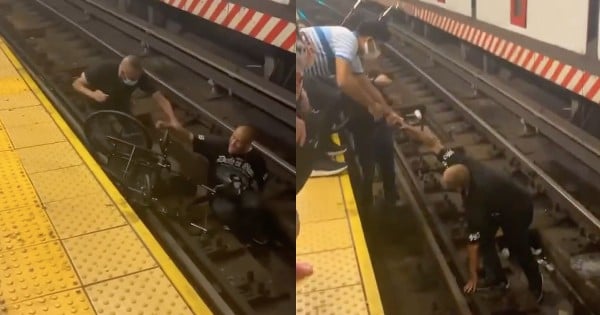 Imagine waking up to hear a voice you recognize and figure out that it was actress Julie Bowen from "Modern Family." Sounds like something that would happen in a dream, right? Well, this actually happened to a woman hiking in Utah.

Minnie John, her husband, and her son recently decided that they wanted to hike in Arches National Park to see the ‘Delicate Arch,' the largest one in the park. A nice day with her family instantly turned into a rescue.

Trouble On The Trails

When they began their adventure, it was already 100 degrees outside. If it's that hot, I don't want to even step outside, let alone go hiking!

RELATED: Hockey Player Who Died Saving Teammate And His Pregnant Wife Is Hailed A Hero

With plenty of pictures and videos of their journey, Minnie shared the story on Facebook in three separate posts. In one clip, Minnie's husband asks her if she's okay. With her eyes on the prize, she kept going.

Toward the end of the hike, Minnie had to take a break and told her family to continue without her while she sat there. She has diabetes and had forgotten to eat since breakfast and had not stayed hydrated. Unfortunately, Minnie fainted while resting on a rock by herself.

This was where things could've ended horribly. But luckily, a certain recognizable angel found her in time!

Julie Bowen From ‘Modern Family’ Swoops In To Help

Julie Bowen, the actress that plays Claire Dunphy in the hit sitcom, ‘Modern Family,' just happened to be hiking the trail that day. Even luckier, Julie's sister, Annie Luetkemeyer, was a doctor that could safely take care of her injuries: a broken nose and cuts around it.

With her eyes still closed, Minnie heard a voice say, "You're gonna be fine. I've got a doctor here. She's going to take care of you." She immediately recognized the voice without opening her eyes and asked if she knew her.

RELATED: Denzel Washington, Christian Celebrity, Is In The News For Helping Homeless Man In Danger

At this point, Minnie opened her eyes but still couldn't remember since she had just hit her head. That's when Julie said, "‘Modern Family,'" and Minnie replied, "Of course!"

Can you imagine waking up from fainting to have a beloved TV mom taking care of you? You'd definitely ask yourself if it was real life!

Dr. Luetkemeyer cleaned and bandaged her wounds while Julie assured other hikers that Minnie was alright and that the situation was under control.

Minnie got a lovely picture with Julie and Annie to commemorate the accident and exciting meet and greet. It's always nice to know that some celebrities are just kind, normal people at the end of the day. Minnie said, "They were so down to earth, so genuine, so sweet."

You May Also Like: Parents Report 4-Year-Old Boy Missing And Then Dash Cam Rolls As Police Pull Him From Pond

God bless Julie and her family for taking care of Minnie!

WATCH: Julie Bowen From ‘Modern Family’ Comes To The Rescue

LISTEN: Man Trapped At Sea Spent More Than 14 Hours Clinging To Buoy And Waiting For Rescue; Selfless Mom Died Saving Her Twin Boys After Using Her Body To Shield Them In Crash