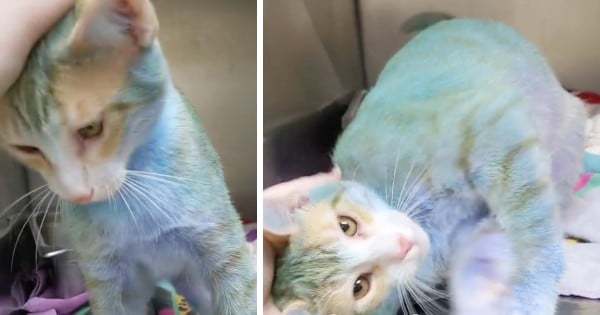 This poor kitten trapped in a U-Haul tagged along on a road trip after a man found her in the back of the rental truck. The two travelers faced a few obstacles on the trip, but Steven Lang refused to give up on her. This lost baby's happy ending will make you smile.

In order to pick up supplies for work a couple of states over, Steven had to rent a U-Haul. He planned on a simple drive there and back. Little did he know, he'd have a buddy.

RELATED: Animal Shelter Goes Viral When Cat With Blue Fur Has Everyone Worried

After hearing a faint meowing, he found the kitten wedged between the spare tire and the truck. He successfully got the baby out from underneath the vehicle and held her. But only for a second! She jumped out of his arms and scurried off to hide behind some propane tanks at the gas station.

Some people may have just let her go, but he knew that he had to rescue her. Steven and his wife foster a bunch of kittens at their home. So, they were the perfect people to find the kitten trapped in the u-haul.

He spent three hours trying to catch the clever kitten at the gas station. Once he was able to catch her, he held tight and hopped into the truck where she'd be safe and couldn't run away. But boy, was he wrong!

The feisty kitty bit and clawed enough until she was free.

She quickly shoved her way up into the dashboard of the truck while consistently meowing to let Steven know she was very unhappy.

Unable to coax the kitten out of the dash, Steven decided to continue his trip as planned. At the very least, the kitten was safe trapped inside the U-Haul.

Unfortunately, 20 hours is a long time to be stuck anywhere. The kitten peed somewhere inside the dash creating a less-than-pleasant aroma in the truck cabin.

As unpleasant as the smell was, Steven wanted her free to live a happy, healthy life. Closer to home, a car dealership mechanic took the dashboard apart until they finally spotted the kitten burrowed in some wires.

YOU MAY ALSO LIKE: Bruce Willis The Cat Was Called The Saddest Cat In The World But Then God Sent A Special Angel

Steven and his wife decided to adopt the kitten themselves. After all, she could at least repay them with snuggles for their troubles!