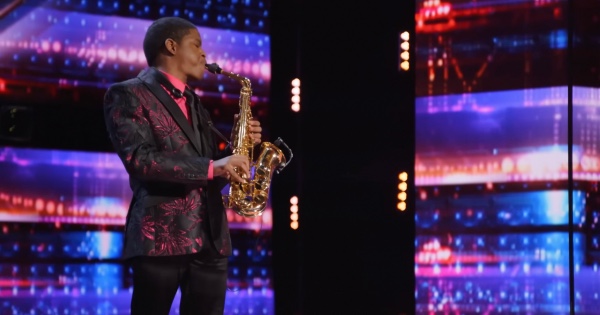 Madison Taylor Baez is a long-time fan of America’s Got Talent. The 11-year-old was sitting in the audience when she was given the chance to sing during one of the show’s breaks. And if you think her performance is impressive, just wait until you hear what she’d do with the million dollars if she managed to win the show!

At the start of the video, we see young Madison Taylor Baez (who goes by Maddie) with her dad. The 11-year-old has dreamed of auditioning for America's Got Talent since she was 4. She tears up as she shares that now she is there to watch them record the show.

During the commercial breaks of the show, the emcee invites members of the audience to sing to entertain everyone while they wait. The emcee is having fun and keeping the energy level of the audience up.

But things took a turn when he went up to young Maddie and asked her to sing.

She chooses a soulful rendition of "Amazing Grace." Simon is walking back to his seat when he hears her and his eyebrows shoot up in surprise and admiration. The crowd goes wild and the judges love her. The emcee hugs her and then takes her over to talk to the judges.

RELATED: Daughters Secretly Signed Him up to Audition and the Emotional Dad Has Whole Crowd in Tears

Simon asks her what her name is and how old she is and then the audience chants, "on the stage!" They ask her to sing up on the stage. She shares that she has been to many tapings of the show and it has always been her dream to sing during the commercial breaks. Today she is getting her dream, and her commercial break song is turning into an impromptu audition. She starts to cry as she is overcome with emotions.

Maddie sings the chorus for "Amazing Grace" and she hits incredibly difficult notes with ease. Her passion and joy come out through the song. The crowd goes wild and stands clapping, the judges join in.

However, she is not finished. She sings the next verse with such confidence. She has such a mature voice for such a young age.

After her song, the crowd stands and cheers and Maddie is crying in happiness. They ask Maddie what she would do with a million dollars and she says that she would help her dad with cancer research because he has had stage 4 colon cancer for nine years.

The judges decide to go ahead and vote and the crowd chants "golden buzzer." They give Madison Taylor Baez the golden buzzer straight to the live show. They bring her dad to the stage and encourage them. He says that his daughter started singing when he was in treatment at the hospital. This little girl has a lot of wonderful attributes and watching her tender heart is amazing.

YOU MAY ALSO LIKE: Heartfelt ‘Fix You' Audition From Young Tween Earns Him The Golden Buzzer

As Maddie sings about God's amazing grace, we are reminded that He has grace upon grace for us. He loves us even in the hardest times and He is the only one who receives all the glory.

"For from his fullness we have all received, grace upon grace.'" John 1:16