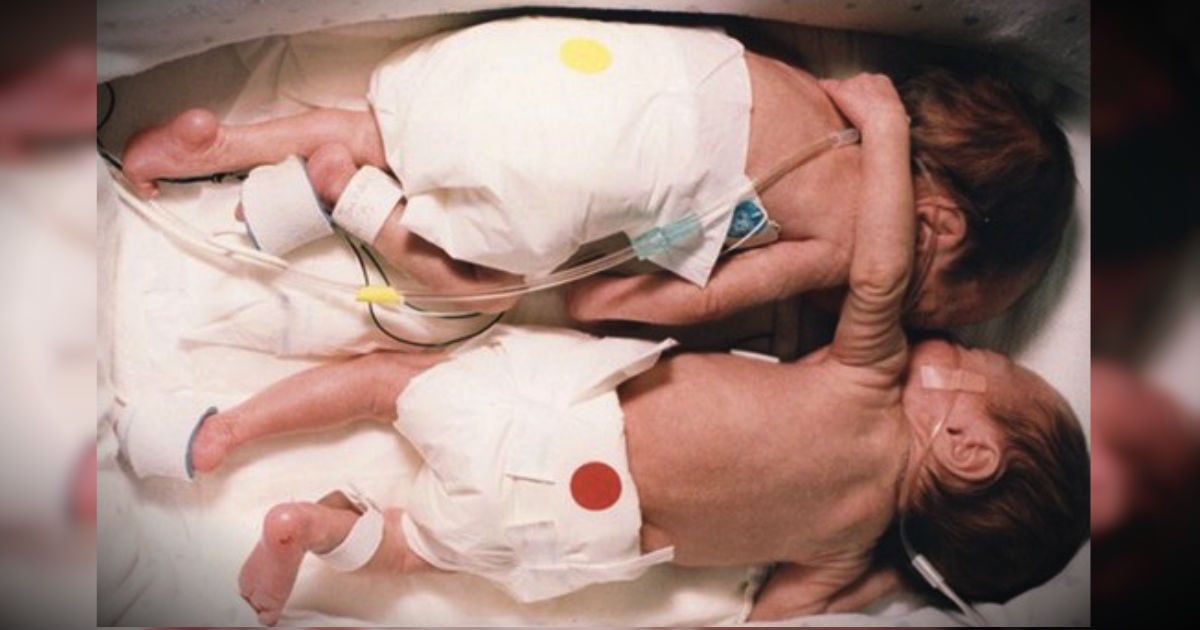 20 Years Ago, These Twins Made History With A Miracle Hug — WOW!
Read Article »

Proud To Be Jaxon Strong!

A baby's first birthday is always special. But for Jaxon, it's monumental, and proof that God does not make mistakes!

Little Jaxon has a very rare neurological condition called microhydranencephaly, although it took doctors quite a while to finally land on this diagnosis. It's a disorder that affects the brain, and for Jaxon it meant being born with part of his skull and brain missing, resulting in significant disabilities. In fact, when a brain abnormality was discovered at the 17-week ultrasound, it was just a few weeks later that doctors suggested Jaxon be aborted, since they did not expect him to survive the pregnancy. But Christian parents Brandon and Brittany Buell were against the termination. Brandon says,

"We would never know what Jaxon could have been, if he could have survived. Who are we to decide? We were given a child, we are given a chance and we have to be his voice."

So, the family put their trust in God, and little Jaxon was born alive at 37 weeks, proving they had made the right decision. Still, doctors continued to warn Brandon and Brittany that Jaxon wouldn't be able to survive very long. In fact, when Jaxon was released from the NICU three weeks after his birth, the doctors told his parents that he would be going home simply for "comfort care." Brandon says,

"They truly did not expect him to make it very long. Yet, every day that we were with Jaxon, even from the beginning, we were seeing a small glimmer of hope, which has grown more and more each day, and it was that hope in him and the fight he always had that very naturally gave him the nickname of ‘Jaxon Strong.'”

That nickname led to the creation of his own Facebook page called Jaxon Strong, where hundreds of thousands of people across the globe follow his progress and draw inspiration from this sweet boy's incredible fighting spirit. The family has been overwhelmed by the love and support they have received through the Facebook page, and through the GoFundMe page that has raised over $120,000 in donations, which has helped with medical expenses and also allowed Brittany to stay at home full-time with Jaxon. The time with mom has been a true blessing, with Brandon saying,

"He thrives with his mom, that one-to-one stimulation that no other therapy can give."

Despite doctors warnings, his parents say caring for Jaxon wasn't all that different from other babies most of the time. And it took quite a while to figure out exactly what was wrong with Jaxon.

It wasn't until he was 10 months old and began screaming incessantly — something completely outside of his usual behavior — that a correct diagnosis was made. When their regular doctors said they couldn't do anything for Jaxon, Brittany and Brandon stepped out on faith and traveled to Boston Children's Hospital, where the specialists narrowed down his condition to that of microhydranencephaly. Armed with the knowledge of what was behind the issues Jaxon was having, they were finally able to better treat him and he returned to the content baby he'd previously been.

And this little miracle only continues to show just how powerful our God is! The same boy who was told he'd never survive past a few weeks at best recently celebrated his first birthday. And that's not all. His dad, Brandon, recently shared more about with Today, about Jaxon's progress and how his journey has changed their lives for the better:

"We want people to know: Jaxon is not on life support, he’s not struggling and he’s not uncomfortable. He’s actually learning, thriving and getting a little better each and every day. It’s absolutely remarkable.

He can see. His vision may be fuzzy or maybe he can’t see colors, we just don’t know that yet.

His hearing is excellent. When we read books to him, he listens and he looks at the pages. He loves music.”

“There’s so much light and life in his eyes that we see when he responds to something.

He absolutely recognizes me and my wife. He loves to smile at us. I swear, he’s the sweetest baby we’ve ever met because he’s always in a good mood, unless he’s teething. He snuggles with us so close.”

“He’ll stiffen both of his legs so he can stand when we hold his arms. Just this past week, he sat on his own. That’s a huge milestone for him. He gets physical and occupational therapy as part of his treatment. . .

A special needs parent is a very strong person who has to deal with something that’s not easy to understand or cope with.

It’s changed us for the better and he has certainly made us stronger people. The petty things that used to make us mad, like rush hour traffic or stubbing your toe - it doesn’t faze us anymore because our priorities are so much richer and deeper now. He has changed our lives and I’m pretty sure a lot of special needs parents will say the same thing."

And so, these brave parents are trusting in God and taking things day by day, enjoying the blessing of their beautiful son. Doctors have stopped trying to guess at how long Jaxon will live, and his parents say they believe he can be here as long as he wants. The also know that, no matter how long or short Jaxon's life may be, it has a mighty purpose. Brandon says,

"We're proud of Jaxon for being so strong. We're proud of his story and that it has inspired so many people. We're humbled by how many lives Jax has touched, and by the countless people, organizations, publications, and celebrities with large audiences that have either contacted us or have chosen to highlight and share his journey on their own."

And watch as Jaxon surprises his parents by saying "hello!"

Jaxon says “Hello” to Germany to the kids that drew him pictures!!!! You can’t see our shocked and happy expressions behind the camera, but we are super proud parents to be able to witness Jaxon speaking yet again!!! Such a brilliant little man!!! #JaxonStrong

It’s amazing to see God’s power! For even more amazement, check this story out!