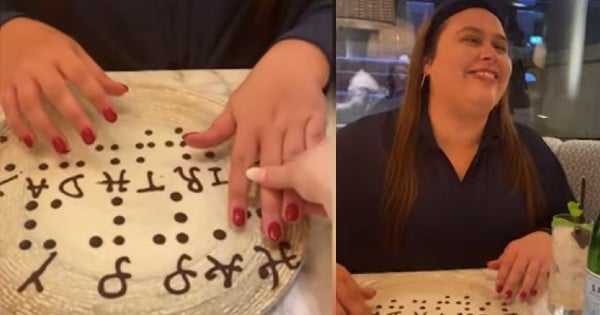 One struggling mom made a birthday gift for her 5-year-old kid, and strangers on the internet stepped in to help make her kid's birthday even more special.

Tiffany Holloway has a young son named Jonas who is very into manta rays and anything related to the ocean. For his recent birthday, Jonas asked for a stuffed manta ray, but Tiffany realized that she would not be able to buy one for him because of their financial situation.

RELATED: Restaurant Writes ‘Happy Birthday' in Braille for Blind Woman and It Leaves Her in Tears

So, this mom got creative. She used her son's old baby blanket, a pattern that she had drawn on a cardboard box, and a couple of buttons to sew her son's birthday gift.

"I sat on the couch until 1 in the morning, poking myself with that needle until I'd finally finished sewing it together," Tiffany shared. "I took two buttons off one of my blouses and used those for eyes."

After completing her creation, Tiffany was proud of herself and decided to share what she made online. She posted it on Redditt and, to her surprise, it received thousands of likes and comments.

"I figured I'd be lucky to hear from a couple of people. I thought I might get teased because the button eyes aren't on straight," she said.

People were commenting on her post, saying how her handmade stuffed animal was way more special than any store-bought manta ray could be. And dozens of people even asked if they could send Jonas additional birthday gifts.

Tiffany agreed to the kind strangers' offers, and soon packages came in for Jonas with plush ocean creatures inside. "I've never seen him so happy," Tiffany said. "I can't thank people enough for making him feel special. I've been having a tough time financially and was feeling like a failure as a parent until this happened."

YOU MAY ALSO LIKE: Prayer Surrounds Mom During Fight for Life and She Credits God for Beating Stage 4 Colon Cancer

And it wasn't just stuffed animals that strangers gave to Jonas. "One man paid for us to go to the aquarium in Oklahoma City about 20 minutes away, and another person bought us tickets to the zoo," Tiffany shared. "In both places, Jonas was able to see manta rays for the first time and pet them."

What an incredible story that shows how simple acts of kindness can have such an impact on others. This is one birthday that Jonas will never forget thanks to his mom and the generous hearts of strangers on the internet!