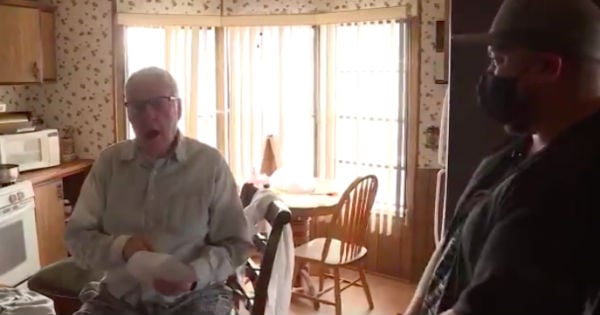 Nathan Apodaca is a 37-year-old from Idaho Falls, Idaho who became a TikTok sensation after he posted a video of himself on the platform and it went viral around the world. The video was of him skateboarding while listening to ‘Dreams' by Fleetwood Mac and drinking Ocean Spray Cranberry Juice.

His unlikely video came about when he was traveling to work, and his truck broke down on the side of the highway. This was not a new experience for him since the vehicle has more than 330,000 miles on it. Since Nathan was just a few miles away from the potato warehouse where he works, he grabbed his skateboard from his truck and decided to use that for the rest of his commute. He also grabbed a bottle of Ocean Spray Cranberry Juice from his truck to drink during his ride.

“I was just sitting there, and I’m like, ‘OK, I’m not gonna sit here and wait for nobody to pull some jumper cables,'” Nathan said. “‘I’m not gonna flag anyone down.’ So I grab my juice, grab my longboard, started heading to work. When I heard ‘Dreams,’ that’s when I figured, ‘OK, this is it.'”

Once he recorded the video and posted it online, it garnered over 100,000 views within the first hour. Now that number of views has reached over 50 million.

“It’s just a video on TikTok that everyone felt a vibe with,” Nathan shared. “I’m happy that I could chill the world out for a minute.”

Because of the popularity of Nathan's video, ‘Dreams' by Fleetwood Mac that came out in 1977 has now skyrocketed to the number 1 song on iTunes. And the song recently had its largest-ever streaming week with 8.47 million streams in the United States.

Ocean Spray's stock price also doubled after Nathan's video went viral. And the executives at Ocean Spray thanked him by giving him a surprise gift, a cranberry red Nissan pickup with the truck's bed filled with jugs of Ocean Spray juice. Now Nathan will have a new, reliable car to get him to work!

Prior to Nathan's social media fame, he was living in a trailer with no running water or electricity. He also takes care of his two teenage daughters. Fans of his donated over $15,000 to help him, and the money has helped change his life. He wants to use the donations to put towards a down payment on a home for his family.

YOU MAY ALSO LIKE: Man Discovers 85-Year-Old Next Door Neighbor Has Spent A Year Living Without Running Water

Nathan Apodaca didn't know what would happen when he posted that fun video online, but it is so great that it resonated with so many people and brought smiles to faces everywhere.

WATCH: Nathan Apodaca Shares Video After Car Breaks Down And It Goes Viral