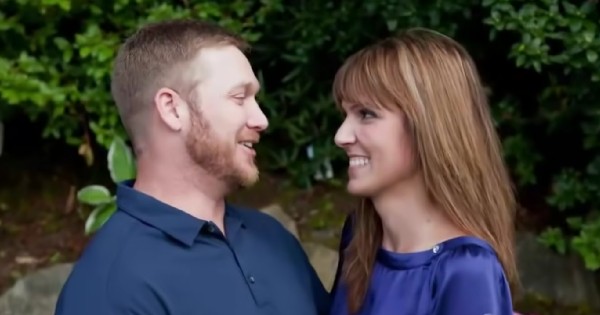 ‘American Sniper’ Widow Feels The Pain Of Her Loss. But What She Did On Their Anniversary–TEARS!
Read Article »

“The tighter the hug, the better!”

Alzheimer’s is a long and painful disease to watch. I’ve had family members attacked by this illness and it’s a sad end to a beautiful life. But this man has found the beauty (and laughter) as this horrific disease has taken his mom. You’ll be glad you took a minute to read his words. I know I am.

In TJ’s own words:

I have often heard that Alzheimer’s is referred to as the “Long Goodbye.” I’ve unfortunately had a front-row seat to watch this demonic disease sneak up on my own Mother. Then all of a sudden, it grabs hold and can’t be shaken.

What would begin with forgetting why she went into a room would become a stove left on, an unlocked door at night, and untouched daily medicines.

Less than a year ago, I watched as my six year-old would playfully run as “Memaw” would chase her in the yard. Now more often than not, she doesn’t know who Addi is–aside from the “little girl who sometimes holds my hand as we walk the halls of the nursing home.” Holding her hand is a requirement for balance, both mentally and physically. She can no longer effectively do her beloved word-searches. Instead, last week I watched her search her pockets for her car keys. The keys aren’t in her pocket, in fact they’re not even in this century.

My mentor and Spiritual Father would always say, “One of the worst things about Alzheimer’s is that you really lose the person twice. First the mind, then the body.” I’m not sure that Pastor Butler knows exactly how much truth is in his statement, but it’s pretty accurate.

After watching her own mother suffer from this monster, Mom seemed to have a heads-up as she noticed the signs in herself. After two quintuple-bypass heart surgeries, one would think that heart meds would be priority. Yet, somehow Mom’s medicine never ran low. Despite her condition, I’m not convinced that she always “forgot,” but she would rather leave this world suddenly than to suffer down the same road many others have for years.

The roads we travel in life can be scary at times, because we don’t always know our destination or if we are on the right path at all. Imagine that in addition to being unsure about your destination, you’re also unsure of your surroundings…..and even yourself. It’s hard to arrive at your destination when you don’t know what it is–it’s even more challenging when you don’t know know who you are. So who could blame her for not taking her meds? I’m pretty sure that I would do the same thing as she.

As a pastor and a grief counselor for families of hospice patients, I’m studied up as much as I can on terminal illnesses. Many times I’ve seen Alzheimer’s referred to as “The Long Goodbye.” Because the death isn’t sudden, and can often be seen down a long, slow, road each day can be “goodbye” all over again for the patient and the family. However, when I walk into Ridgewood Healthcare in Jasper, Alabama each day and see a short, gray, wrinkled little woman, we both smile from ear to ear. We refuse to let each day be “The Long Goodbye”–instead we see it as a time of “New Discoveries and Hello’s.” Each day holds a new discovery for at least one of us, many times it’s both.

We’ve discovered that Mom can take her false teeth out, touch her nose with her tongue, then forget that she did it three minutes later.

We’ve discovered that mom can stand while hugging me 43 seconds before her legs feel weak.

We’ve discovered that Mom can help plan her own surprise birthday party. And still be surprised– twice while she’s there.

I’ve discovered that if I find her sleeping, she loves to be woken up with kisses on her forehead.

We’ve discovered that even though she doesn’t remember it, the pact that she made with an eleven year-old boy at his Daddy’s grave wasn’t a commitment of words, but of the heart: “No matter what, as long as we are together, we’re gonna make it.”

I’ve discovered that after 33 years of never hearing any evidence, my mother has still never once “passed gas.” However, her roommate apparently can even when she isn’t in the room with us–at least that’s who Mom blames it on.

We’ve discovered that taking selfies is fun, especially on days that Mom doesn’t realize how the phone works.

She’s discovered that if she mentions pitifully “I have no money and I’m really thirsty,” a case of Cokes will miraculously appear the next morning on her chest of drawers.

I’ve discovered that sometimes Mom isn’t as bad as she wants me to think, and is pretty much just playing the game. In fact, she’s probably the coach.

We’ve discovered that the tighter a hug, the better.

I’ve discovered that despite everything she’s been through, she’s still able to squirm pretty quick if I tickle her collarbone with my chin when we hug.

We’ve discovered that a 6’2″ 275 lb man and a 77 year-old woman can fit on a hospital bed together on a bad day. It takes a little work, but it can be done. And it usually leads to laughter.

We’ve actually discovered that everything leads to laughter.

We’ve discovered that the statement “Ignorance is bliss” is true in Mom’s situation.

We’ve discovered friendships and Love that we’ve never had with staff and other residents at Ridgewood.

I’ve discovered a new Calling and passion for the healthcare field since Mom’s admittance.

We’ve discovered that sometimes it’s fun to wonder why in the world she’s “stuck” in a place with a “bunch of old women, because I’m not old.”

Each day she discovers new people in the hallway. Of course they’re the same people that were there the previous day, but that’s one of the perks of Alzheimer’s. There’s always someone new to meet.

I’ve discovered that when God charged this woman to hand pick me as an infant and give me the GREATEST life ever, and she didn’t stop when I became an adult. And even though I’m the “adult” now, she still continues to give me the greatest life ever.

We’ve discovered that she can look at my bride and say “She looks pregnant!” Without any repercussion if she hadn’t been (thank God she really is)!

Each day I discover a new appreciation and Love for my Mother.

We’ve discovered that if I walk into her room and find her putting her wig on sideways, it takes me less than three seconds to fall into the floor laughing. I’ve also discovered that then it only takes her five seconds to roll her eyes and stick her tongue out at me.

I’ve discovered that God really does Love us, no matter what the situation we find ourselves in.

So is Alzheimer’s really the “Long Goodbye” as it’s been labeled? Not for a little old woman and her son. It’s a time full of new discoveries and friendships.

After all, we just met today, right?

What comes to mind, is this beautiful scripture (Isaiah 40: 31): “But those who hope in the Lord will renew their strength. They will soar on wings like eagles; they will run and not grow weary, they will walk and not be faint.”