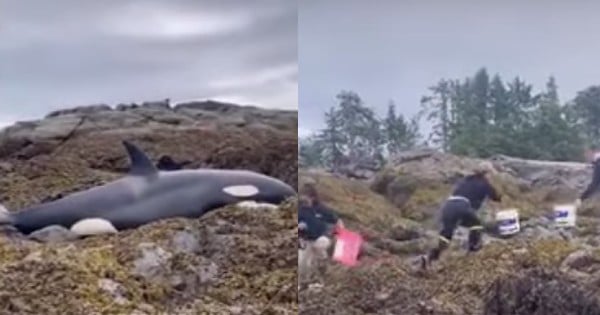 After his family dog falls into the pool, a brave 11-year-old jumps in after him to help him back onto the ground!

It looked liked nobody was around when the curious pooch got a little too comfortable near the edge of the pool. The security camera footage shows the boy seemingly come out of nowhere to save his best friend before it was too late.

RELATED: Tiny Dog Falls Into Pool And Cameras Caught The Moment A Furry Angel Came To His Rescue

We probably all know that most pet owners would do just about anything for their fur babies. But sometimes, there's only so much you can do. Like when an 11-year-old needs to somehow get his 150-pound Rottweiler out of a pool…how would that be possible?!

Matheus Felipe, from Brazil, had to deal with that exact frightening scenario recently. But he didn't even think twice when he saw his buddy, Nitro, in trouble.

Boy Jumps In When Dog Falls Into Pool

In the video, you can see Nitro innocently approach the in-ground pool, sniffing around. He was just being a curious pup, nothing wrong with that! Clearly, curiosity can sometimes get people AND animals into so dangerous situations.

Nitro smelled a few spots around the pool but didn't lose his footing until he leans a little too far forward. He does seem a little top-heavy with the big Rottweiler head! The poor guy falls into the pool and didn't know how to get out. He frantically splashed around and desperately tried to get out of the water.

Matheus heard the splash from a ways away and quickly rushed to the pool. He said, "I didn't know what to do... it was so cold that day." Adrenaline probably gave him a boost of courage because Matheus immediately jumped in the water while still wearing his clothes.

You can see him lead Nitro to the corner and was able to push the heavy dog up onto dry land. Thank God that Matheus was there at the right time!

You can easily tell that Nitro was super happy to see his little human. He stood right near him and even gave him some thankful licks!

You May Also Like: Heroic 8-Year-Old Brother Saves Sister From Drowning When He Spots Her Body In The Pool

Matheus shared, "He's a good friend to me. I cried a lot with him." Close calls like that can surely be emotional. We are glad that Nitro and Matheus got out of the pool safely. May both of you have years of fetch together!

Be careful for nothing; but in every thing by prayer and supplication with thanksgiving let your requests be made known unto God. And the peace of God, which passeth all understanding, shall keep your hearts and minds through Christ Jesus. Philippians 4:6-7