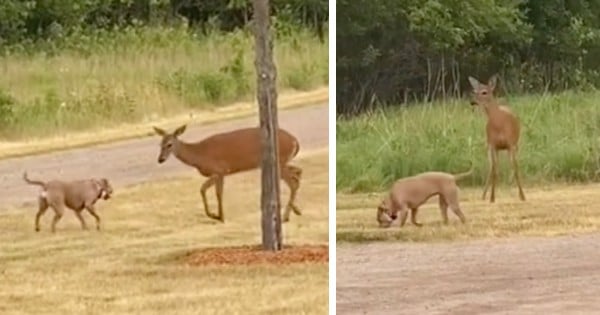 When a teen unknowingly stepped foot right into danger, his loyal companion immediately jumped in to save him. Marley the dog was bitten by a rattlesnake twice to save his owner. The fear of losing his best friend instantly entered the teen's mind.

Earlier this month, Alex Loredo, an 18-year-old, was doing laundry at his family home in San Diego. The family's laundry room is detached from the rest of the house, so Alex had to walk outside to get to it.

RELATED: Pit Bull Hears A Little Boy Scream And Then Takes Snake Bite In His Place

As soon as he pushed the door open and took a step outside, he heard a loud rattle sound. Since it was so loud, he knew the rattlesnake was close. But before all these thoughts even formed, Marley the labrador leaped through the doorway and got between Alex and the snake.

As Marley attempted to grab the snake, it struck at the dog and bit his tongue. Unfortunately, the snake lunged a second time and bit Marley's neck. The rattlesnake then retreated as Alex got Marley back into the house. The injured pup collapsed and cried in pain.

Alex got his buddy into the car and to the nearest vet as quickly as he could, but that vet didn't have appropriate medications. He had to drive another 25 minutes to a pet hospital where they could treat him for venom. Alex said, "Marley’s face started to swell up, and he began to start having breathing complications. Blood also began to start pouring from his mouth."

Having to see your dog and best friend in so much pain and so close to death sounds unbelievably heartbreaking!

RELATED: Man Scans The Water For His Fur-Baby And Then Watches In Awe As Dog Saves A Fawn

The hospital estimated the care would cost around $9000 even though there was still a possibility the pup wouldn't survive. Marley had to stay for several days while Alex constantly worried about him. Even though Alex knew he wouldn't be able to pay for it all by himself, he wasn't ready to say goodbye to his best friend.

Alex started a Go Fund Me page to raise money for all of the expenses. Strangers donated far more than Alex needed. Marley received treatment for the venom and nerve damage, and he slowly recovered. The heroic pooch returned home, and Alex said, "Thanks to all of you Marley and I will have the opportunity to make new memories and cherish every one of them."

You May Also Like: Tiny Dog Falls Into Pool And Cameras Caught The Moment A Furry Angel Came To His Rescue

Lord, thank you for saving Alex and Marley and giving them many more days to enjoy life together.