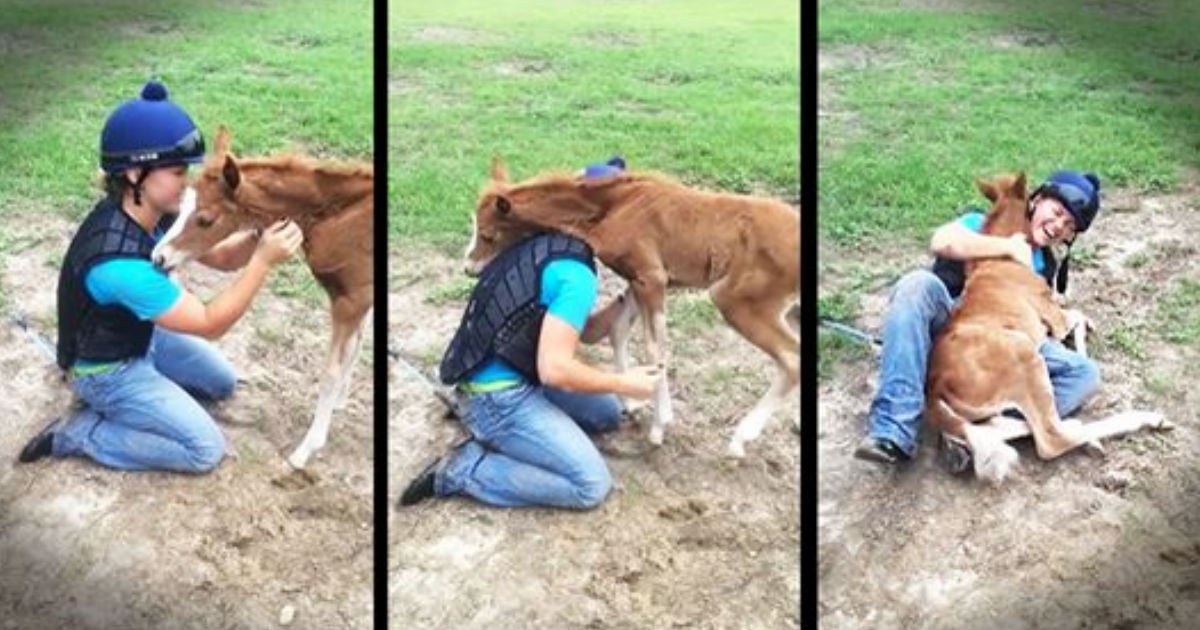 A Sweet Foal Lays With Sunny On The Ground
Read Article »

Saved for a reason.

You can’t judge a book by it’s cover NOR can you judge a dog by a faulty stereotype. And thank God someone looked pas this sweet pup’s ‘breed’ and gave her a second chance for a meaningful life!

Libby is her name and yes, she is a pit bull. She is the only survivor from her litter because all of her siblings were put down simply due to their breed and the negative press pit bulls have been labeled with. Until this woman looked past the ‘title’ and saw what a beautiful, sweet, spirit Libby had.

Marcia Poitter saved Libby from the shelter and has come to know her as a sweet puppy with a lovable nature. Apparently, Libby loves playing in the water being sprayed from the garden hose – making it easy to love her even more.

Regardless, her ‘breed’ alone did make it difficult for Marcia to find Libby a home. So, she’s been living with Marcia for 3 years. Until now.

Marcia began doing some homework on ‘working dogs’ and what makes a dog a good fit for the police force. She contacted Brad Croft of Universal K9. He specializes in training shelter dogs into police dogs. Perfect!

Libby was immediately accepted into Brad’s training camp but there was one hurdle. There was a $1,000 fee to cover her training costs. So, Marcia took to social media and met Debra Guajardo. Debra is an attorney and pit bull advocate! Can you believe it?!

Debra, owning a pit bull herself, donated the money! Saying, “I really felt like she had a lot of potential if placed with the right person.”

Months later, Libby has proven to many that she has what it takes! She will be working as a narcotics dog for the local police department. And it gets better.

Libby has found a permanent home with the police officer she’ll be working with.

Debra says, “It was a privilege to be a part of Libby’s story. Every bust she makes, every gram of drugs she detects and clears from our streets and communities will reaffirm the incredible value of shelter dogs -– including pit bulls — and the valuable contribution they can make when given the opportunity.”

Thank you to everyone who did not give up on Libby! We are grateful for your compassion and commitment to these animals! May God bless each on you in your lives and line of work. And may God use Libby for GOOD for many years to come!! AMEN! 🙂