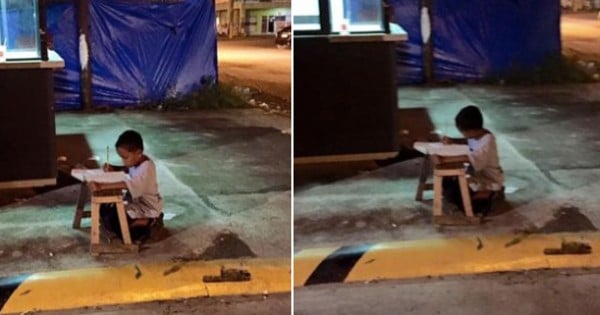 This Heartbreaking Photo Sparks An Outpouring Of Support That Is Just AMAZING!
Read Article »

There Is Hope, After All

I came across Leslie's story on The Mighty, and just had to share. Leslie never had it easy, battling depression, anxiety and Obsessive Compulsive Disorder her whole life. But she'd always coped and managed to pull through. But after a string of personal tragedies, she found herself buried beneath the weight of depression. Her days got darker and darker until she simply gave up.

But God never gives up on us, no matter what, and He had not given up on Leslie. He knew just how to succeed where others had failed. And when He is at work, even the smallest, most unlikely things can bring about great change. With a gentle and loving persistence, God used a little, black cat named Boogie to show Leslie the light.

"I sat on my patio day after day, feeling depressed, scared, lonely, isolated, empty and hopeless. I couldn't remember how many days it had been since I went anywhere or wanted to talk to anyone. I didn't even have music playing. I used to love music. Things change.

I had no motivation or energy to do anything, and no joy. Nothing mattered. My friends and family were ready for my major depressive disorder, grief, severe anxiety, PTSD and fear to be gone. After all, it had been over a year since the last death of my loved one. I wished it were that easy. During rare times when I was around friends and family, I still felt alone. They wanted the person I used to be. Trouble is, I didn't know if she would be back.

One day, I made coffee and went to the patio. There was a black cat near my back door. We scared each other. After getting over the initial shock, he approached me and rubbed around my ankles and feet. I used to love cats. Things change. It was an effort to talk to, look at or pet this beautiful creature. So I didn't. He hung around anyway, rubbing on me occasionally. He greeted me every morning for four days. He was patient and persistent.

On day five, he wasn't there to greet me. I discovered I actually missed him. Three days passed. No cat. I'd gotten used to him hanging around. Then one morning he was back, so I gave him a snack and talked to him. He started meowing in response. I petted him, and it felt good. We both liked it. A pattern was established. He would show up and stay for a day or two until he went back to wherever he lived. I found myself looking forward to his company. We eventually started playing during his visits. He made me smile and giggle. He even warned me of a sizable snake in the backyard. It was good to finally have a few moments of feeling that everything would be OK, a few moments of light.

The cat turned out to be my next door neighbor's. After he'd been visiting me for two to three days a week for weeks, one stormy night, my neighbor sent me a text asking if I'd seen her black cat, Boogie. We'd exchanged numbers shortly after they moved in, as I do with next-door neighbors in the event of a house emergency and one of us isn't home. I told her he was safe and sound on my patio and that I'd wondered where he lived when he wasn't here. He was too clean and well-cared-for to be a ‘street cat' and certainly wasn't feral.

Not only did the cat bring me some rays of light in my deepest, darkest times, he also facilitated human contact in my life. My neighbor and I forged a friendly, neighborly relationship after learning we shared her cat. I'd been isolating for over a year from friends, family, loved ones and life in general.

One day last year, Boogie disappeared. She and I were both worried about him, but he never came back. We were both sad, but it brought us closer together, and the cat also led to an unexpected friendship in which we were able to help one another through some challenging times. As it turns out, we'd both been withdrawn, depressed and isolated. Now, our grandkids even play together occasionally. We both still miss ‘our Boogie.'

Boogie's surprise visits showed me things do change. There is hope, after all."

There is nothing that is too great for our God. He pursues us daily. Put your faith and trust in Him, and He will see you through it all.

"It is the Lord who goes before you. He will be with you; he will not leave you or forsake you. Do not fear or be dismayed." Deuteronomy 31:8