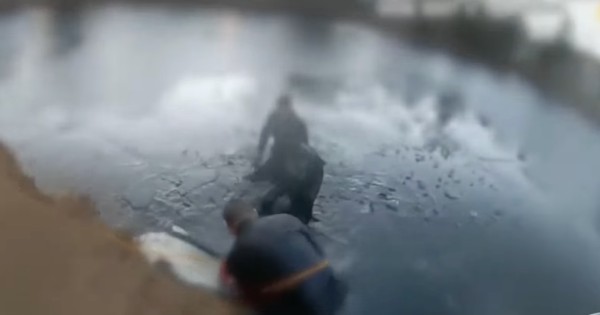 After a truck fell off a jack and a man was trapped underneath, his son came to the rescue to free him and save his life.

RELATED: Son Begs Police To Help Father First As They're Found Clinging To A Cooler In Boston Harbor

Matthew Wilkinson is from Oakdale, California and was recently working on repairing the brakes on his truck. He needed to get underneath the truck for leverage to take off the rotor, and his son, Dalin Wilkinson, agreed to come out to the garage to help him.

But while Matthew was under his truck, it popped off the jack that propped it up. The vehicle fell on top of Matthew's chest.

"The second it popped off, the truck fell," Matthew shared. "All I could think about was the breath coming out of me. I was just squished. I couldn't talk; I couldn't yell."

15-year-old Dalin said that the moment was terrifying. "I heard him make a noise like his soul was leaving his body," Dalin said.

Truck Fell Off Jack But Teen Lifts It To Save Dad

That's when Dalin used all the strength he had, along with the adrenaline that was pumping through his body during the scary moment, to help get his dad free. Dalin was able to lift up the truck just enough for his dad to roll out from under the truck.

Later, the family checked the home security camera to see the moment that Matthew escaped from being trapped by the truck. And sure enough, Dalin's heroic rescue was captured on video.

"My son is my hero. He saved my life," said Matthew.

YOU MAY ALSO LIKE: Police Perform Frozen Pond Rescue After 9-Year-Old Chases His Football Out Onto Ice

The thankful father was treated in the hospital for a punctured lung and broken ribs, but he is now safe and recovering at home. God bless Dalin for saving his dad's life!

WATCH: Son Saves Dad After Truck Fell On Him