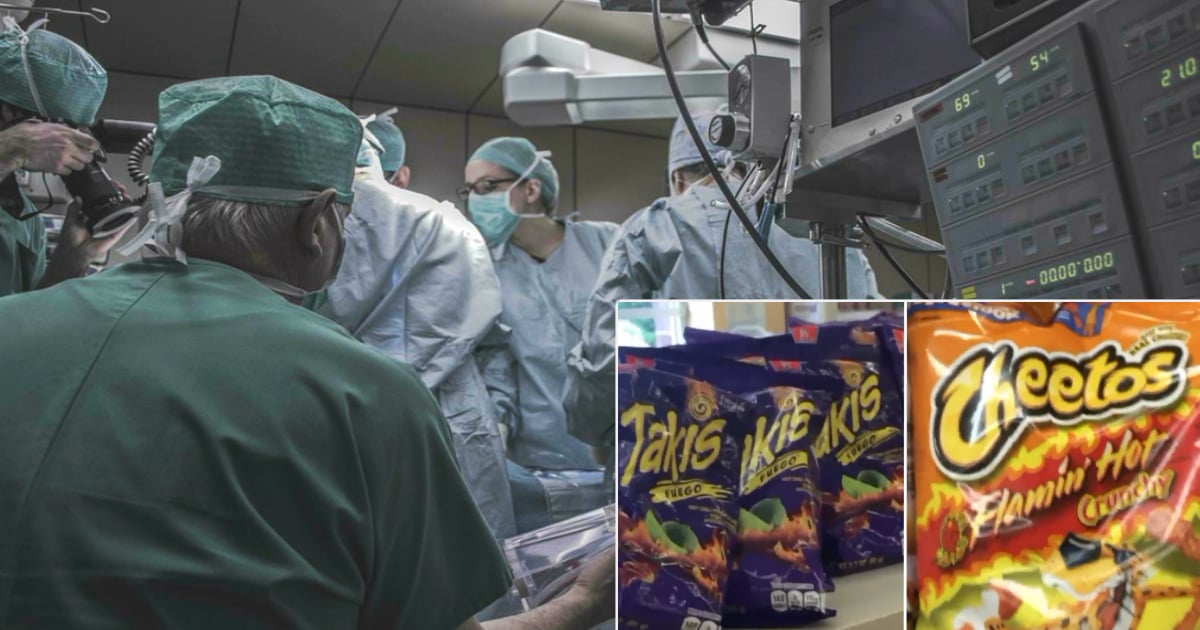 First-time mom Paige Ferguson is doing all she can to warn others after her precious baby fell off the bed. Even though it was only a 2-foot drop, it has changed their lives forever. And Paige wants to make sure it doesn’t happen to anyone else.

While Paige Ferguson and her fiancé Blake Linton were visiting friends, they laid their infant son, Colton, down for a nap on the queen-sized bed in the spare room. Taking care to surround the baby boy in pillows, they thought he’d be safe.

RELATED: Mom Warns All Parents After Her Son Nearly Dies From A Bike Accident

It’s something so many parents have done before. And it’s terrifying how one simple decision can have such a huge impact. 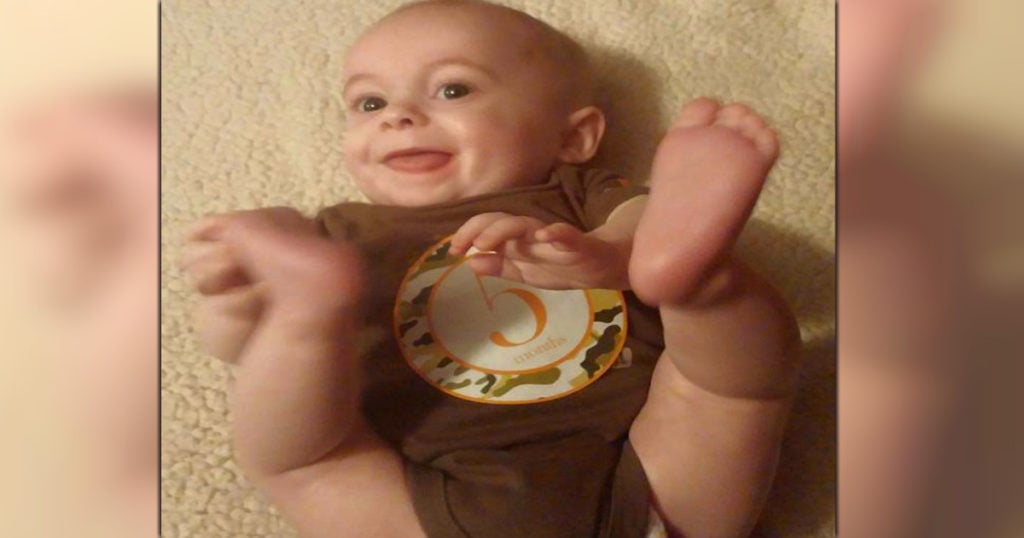 Parents Panic After Baby Fell Off The Bed

While in the next room chatting with their friends, Paige and Blake heard a loud thud. They knew instantly it had to be their son.

"He started to cry immediately,” Paige recalled. “I've never seen his dad move that fast, ever. Blake dropped everything and ran into the room to get him."

Panicked, the couple bolted to the bedroom and picked their 5-month-old son up off the floor. Though the bed was only a little over 2-feet from the floor, the little boy had a bump on the side of his head.

Colton was responsive, but as a nervous, new mom, Paige knew she couldn’t rest easy until she had her son checked out. On the way to the doctor, the baby boy calmed down and switched from crying to cooing. He even smiled.

Still, Paige was determined to have a doctor take a look. And thank God she listened to her motherly instincts!

Baby Fell Off The Bed And Nearly Lost His Life

Even though Colton seemed just fine, a CT scan at the hospital revealed the fall had fractured his skull. As a result, half of the blood from his bump was flowing into his head and onto his brain.

"I remember putting my head down on the bed and I was just crying and crying. I couldn't fathom the idea of something seemingly so minor causing such damage," Paige said.

"I couldn't hold it together,” Paige said. “I will never lie and say that I was strong in that moment. I really wasn't. I kept hugging Blake and saying, ‘I'm sorry.' " 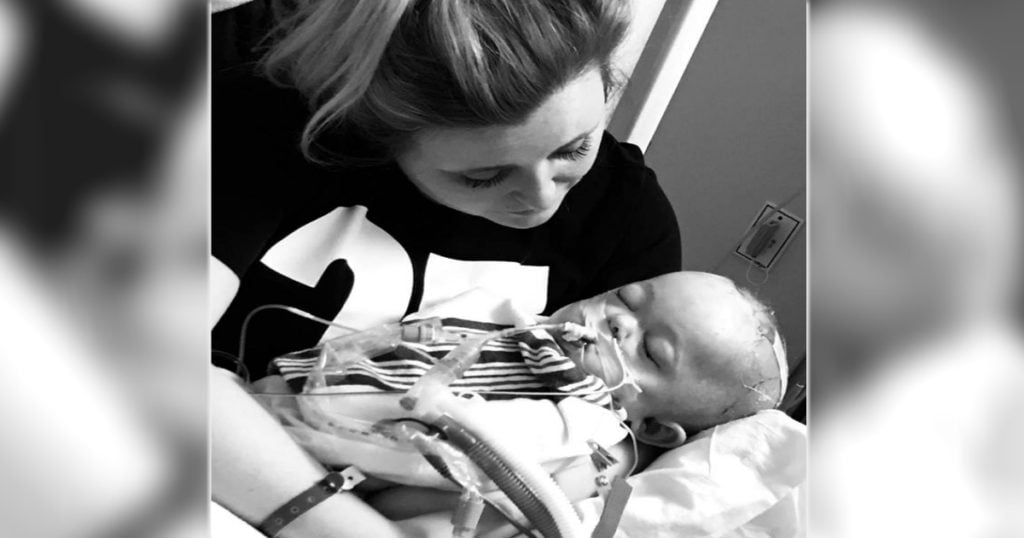 The procedure was risky and Colton went into cardiac arrest for 10 minutes. Even after doctors completed the operation, things were touch and go.

"They didn't think he would live at all,” Paige recalls. “I walked into the ICU after his surgery and the doctor came up to me. Her exact words were, ‘Ma'am, I need you to understand that most likely your son is going to die from this.' "

With aching hearts, Paige and Blake called family members and broke the news. Doctors suggested they begin saying their goodbyes. The couple didn’t feel right leaving Colton on life support, so they took him off, all the while praying for God’s will.

And that’s when something miraculous happened!

Miracle After Baby Fell Off The Bed

Instead of getting worse after being taken off of life support, Colton just kept fighting.

"I was in disbelief. I still am. I just kept praying, and praying,” Paige said. “I couldn't wrap my head around it. It felt like I was in a horrible dream. Like, this can't be real."

RELATED: Heartbroken Parents Take 2-Year-Old Off Life Support, Then Get A Miracle

He spent a month in the hospital and went through another brain surgery. He also had multiple blood transfusions.

But despite the grim outlook, Colton stayed alive. Then, he stunned his doctors by getting better.

"It was amazing,” Paige exclaimed. “Colton was a miracle.”

His condition continued to improve until he was finally well enough to go home!

“At all of our follow-up appointments, the doctors have said, ‘I'm not trying to be mean, but your child should be dead. People do not live through the injury he had. He is absolutely a miracle.' "

It defied all logic. Even his doctors can’t explain it.

"I really give all the glory to God for everything that Colton does now and will continue to do," Paige says.

Paige and Blake know they are blessed to still have their son. And they remain incredibly grateful for that. 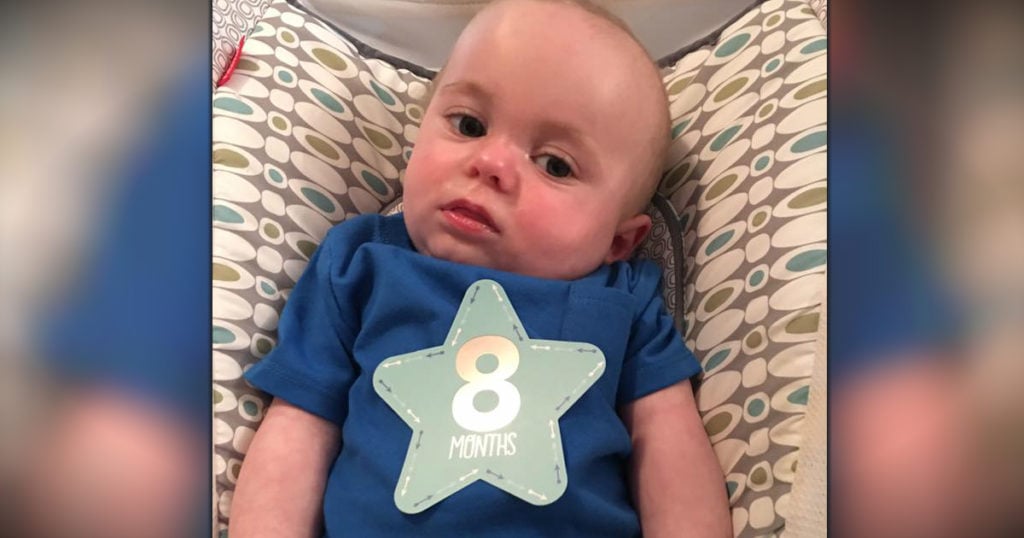 But while Colton’s overcome so much, his life is still forever changed.

"He's very different. . . Even right before his accident he was constantly babbling at us, now he doesn't talk," Paige explains. "He doesn't babble anymore. He's irritable all the time. He's very stiff."

Mom Warns Other After Her Baby Fell Off The Bed

A long road to recovery from severe brain damage lies ahead and some complications may never go away. Colton now has a feeding tube. He also developed severe epilepsy which requires him to take seizure medication. Doctors expect him to develop cerebral palsy when he is older, as well as have trouble walking and talking.

And that’s why Paige desperately wants to warn other parents to never, ever leave their baby in a bed. Even if it’s just for a second and the bed seems low to the ground.

She also urges parents to get their children to the doctor after any bump to the head, no matter how minor it may seem. Colton certainly wouldn’t be here any longer had Paige and Blake not rushed him to the hospital.

Paige can’t help but worry about Colton’s future. But she’s leaving it in God’s hands and trusting Him to continue to miraculously heal her son.

"He's the strongest child I've ever seen in my entire life," she says. "I will do everything in my power to ensure he has a happy life. I really think he's going to do more than what [the doctors] think he will."

YOU MAY ALSO LIKE: Dying Girl's Final Wish, A Trip To Walt Disney World, Brings About A Miracle

Our prayers go out to this family. We just know God has big plans for this little angel!