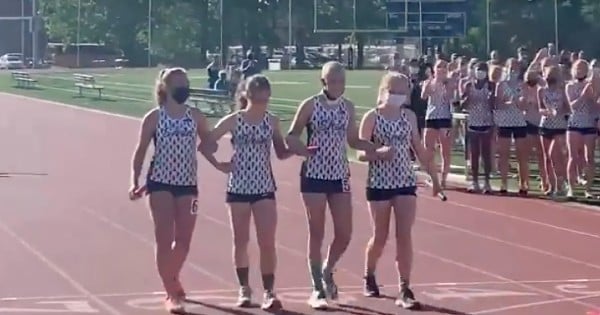 10-year-old ice skater Lolly Barnsbee steps onto the ice at the Broadmoor World Arena and wows with a stunning routine to ‘Somewhere Over The Rainbow.’

We most often think of Judy Garland singing this classic song while portraying Dorothy Gale in the 1939 movie, The Wizard of Oz. But several amazing artists have recorded "Somewhere Over the Rainbow." Those incredible musicians include Patti LaBelle and the Bluebelles, Willie Nelson, Israel "Iz" Kamakawiwo'ole, Ariana Grande, Katharine McPhee, and in this video, Carly Waddell.

Carly's 2019 recording is part of her extended play record entitled "Dream Train," which includes a few lullabies. "Somewhere Over the Rainbow" is one of those timeless tunes that leaves arms tingling and souls singing.

Dorothy may have wanted to be anywhere but Kansas. But those watching Lolly's performance at Broadmoor World Arena in Colorado were likely thrilled to be right there!

Lolly Barnsbee is a Juvenile U.S. Figure Skater and training for the Olympics. And clearly, this 10-year-old ice skater is quite an athlete and an artist!

Lolly spins and jumps and glades across the rink. And as she does, we see the lovely rainbow pattern peek out from the under-side of her sky blue skirt. Her routine seems effortless, and the 10-year-old ice skater gives a little smile at the conclusion of her performance. And, one wonders what great things this little girl will do.

In The Wizard Of Oz, after singing the most remembered song from the movie, Dorothy falls into a deep sleep. A tornado literally blows her away, house and all, to another world. She learns lessons traveling the yellow brick road with her companions, who have a hard time tapping into their personal resources of heart, brains, and courage.

On the other hand, young Lolly is already sharing her gifts with the world. What a blessing that is! As she skates, the performance by this young girl also blows us away. The 10-year-old ice skater has surely learned the value of hard work and of the talents God has given her.

YOU MAY ALSO LIKE: Brother And Sister Figure Skaters Tap Into Heavy Metal For Their Routine And It's Spectacular

"We have different gifts, according to the grace given to each of us. If your gift is prophesying, then prophesy in accordance with your faith;" Romans 12:6

WATCH: 10-Year-Old Ice Skater With ‘Somewhere Over The Rainbow’ Routine

LISTEN: Tragic Story Behind Why Actor Who Played Fred Mertz on I Love Lucy Kept His Hands in Pockets | Conjoined Twins Abby And Brittany Awed Folks Years Ago But Now, They're Just As Inspiring