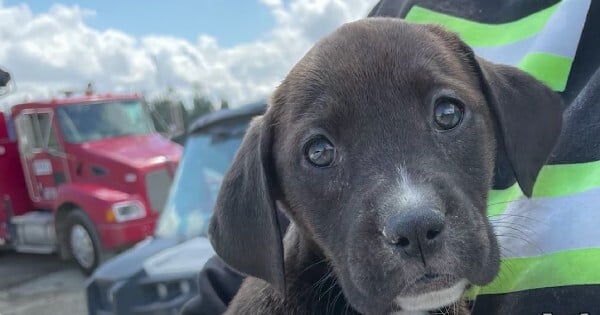 A 100-lb beagle named Jameson was so overweight when rescuers found him, he could barely move. But just wait until you see him now!

Jameson the Beagle's original owner surrendered him to the Arizona Beagle Rescue when he was only three years old — except this young pup weighed a hefty 100 pounds.

Although still adorable, there was nothing cute about his health.

Jamie originally lived with an older owner that would feed him ice cream and cheeseburgers almost every day. As tasty as that sounds, those treats didn't give him the nutrients he needed for a healthy life.

Jamie's foster home would have to drag the 100-lb beagle outside on top of his bed and carry him around in large tote bags to go to and from vet appointments.

Short walks with a bunch of breaks got him started, but. The extra weight eventually took a toll on the poor pup's knees. He had surgery to repair both!

Jamie's rescuers weren't going to give up. They knew the 100-lb beagle would lose weight and become a happy and healthy pooch!

His foster mom said, "Once Jameson had his knee surgeries, it was like a totally different dog." When the vets cleared him to go on walks, Jamie couldn't get enough. His mom said, "It was like this athlete was just building inside of him."

A New Lease On Life

Erin and Chad have been rescuing Beagles for over 10 years and just happened to end up with multiple obese hounds. Each of the chunky dogs before Jamie reached its goal weight, and soon enough, 100-lb beagle Jamie did too.

He could barely engage with other dogs when he first arrived because it was way too difficult for him to move around. But once the pounds began to disappear, his playful side reappeared!

Jameson pounced around with his foster buddies and eventually began running 5k's with Erin and Chad.

We are all rooting for you, Jamie! And bless his rescuers for dedicating their lives to improving the lives of these poor animals.

Let your light so shine before men, that they may see your good works, and glorify your Father which is in heaven. Matthew 5:16

WATCH: 100-Lb Beagle Loses Weight And Learns To Be A Puppy Again