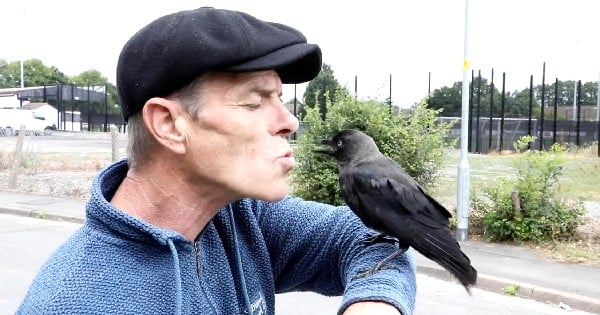 Phil loves water, mud puddles, and getting as dirty as possible. He actually loves water according to his family. When they go for walks, he will seek out any water that he can find.

RELATED: Dog Hides Blueberries In His Mouth And Tries To Play It Cool But His Guilty Face Gives Him Away

But the second getting wet is no longer his idea, the giant Alaskan Malamute becomes a huge, fluffy drama queen!

The last time he had a bath prior to this video was over two months ago. So, his human parents decide it's time for a bath.

They prep the bathroom and give Phil a pep talk. He reluctantly sulks to the bathroom and tries to hide in a corner. His parents then try to give him all sorts of snacks including peanut butter.

RELATED: Man On Crutches Worries When His Dog Keeps Limping, Then Discovers It's Just Sympathy

The huge Alaskan Malamute still refuses and whines as he hides his face in a corner. But of course, he can't help but take a lick of his favorite snack. They also strategically place another one of his favorite snacks on the ledge of the tub as the cat Milo watches with amusement and curiosity. But since Phil refuses his delectable snack, the cat decides he's going to take the treat for himself!

One viewer commented, "The cat is like, “Phil’s probably not gonna live through this, I’ll just take his treat – he won’t be needing it.”

While another commented, "It’s the audience. He knows that the cat is laughing inside at him and that five souls are witnessing his humiliation."

Dog’s Antics Have Everyone Cracking Up

His parents then try to coax the huge Alaskan Malamute into the tub by smearing his favorite tasty treat along the inside of the tub. Yet, Phil ignores his parents and tries to hide behind the baby.

Eventually, after a little more coaxing they get Phil to the tub and eventually get him in. What happens next is nothing short of adorable as Phil expresses his great displeasure about being bathed. Yet, the dirty bathwater proves he definitely needed a good scrub! Poor Phil, he is learning there is a time for everything. A time to whine, a time to hide, a time to play, and even a time to take a bath.

I never giggled so much over a video but Phil has quite the personality. It's a good thing he has patient parents and an endless supply of his favorite treats!

YOU MAY ALSO LIKE: Cat Goes To The Groomer For A Lion Haircut But The End Result Has Her Owner Cracking Up