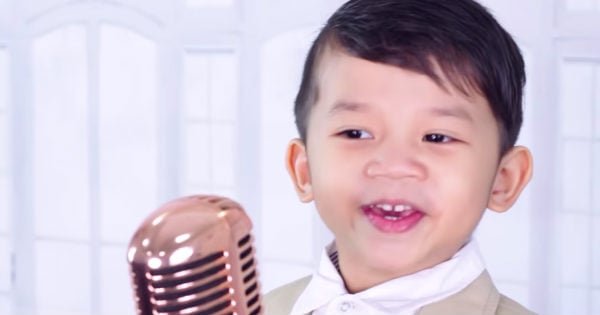 World-renowned tenor Andrea Bocelli and his daughter are singing Leonard Cohen’s Hallelujah together. And the intimate performance in the candlelit Teatro Regio di Parma is absolutely stunning!

But now, he and his daughter, Virginia Bocelli, are performing the Leonard Cohen classic together as a duet. And it’s too good to miss!

But you don’t really care for music, do ya? Well it goes like this: the fourth, the fifth

Andrea Bocelli And Daughter Singing Together

At the beginning of the video, Andrea Bocelli's daughter brings him his guitar and then they sit on the stage with string lights lit all around them.

Andrea Bocelli starts to strum the guitar as his daughter starts singing beautifully the lyrics of Hallelujah.

Lights are all lit up around the theater with an orchestra playing below the father and daughter, and it is quite a magical scene. The two sound beautiful together. And their harmonies are so lovely. This is definitely a pair that you could listen to sing over and over again!

Andrea Bocelli's voice is so perfect for this song, and his daughter just adds that much more joy and warmth to it. She will go far, just like her father, with that wonderful voice!

"Simply the greatest we have! Sir, it's a privilege to hear you sing," comments one person on YouTube after watching the video. "And this number with your dear daughter is simply something else! Thank you."

We hope that you enjoyed this marvelous performance by the talented Andrea Bocelli and his daughter of the beloved song Hallelujah.