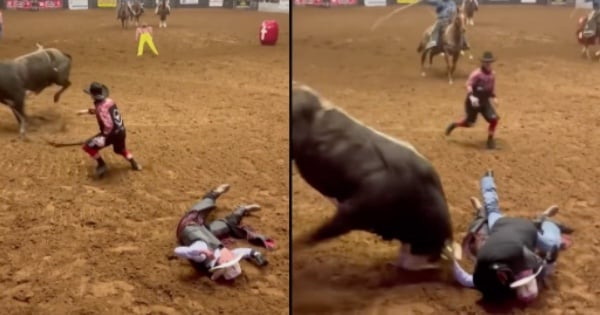 Bull at Texas Rodeo Is Headed Straight for His Son, So Hero Dad Shields Him with His Own Body
Read Article »

Would your child know what to do in an emergency if their bus driver collapsed on the way to school?

In this heroic short story, two brothers jumped into action after their school bus driver collapsed.

On a seemingly routine Monday morning, a bus full of bright-eyed kids were en route to school along with Connor and Seamus Collins that was being driven by 77-year-old Arthur McDougal when they both heard him fall to the floor of the bus before it began swerving all over the road.

“I didn’t see him fall. I heard him hit the ground, and then the bus started veering to the right into the ditch," Connor recalled moments before panic set in.

Quick-Thinking Brothers Save The Day

After Connor and his brother Seamus were alerted to the emergency situation, Connor realized he needed to jump into action. Otherwise, the bus filled with students was in danger of getting hurt.

Connor knew that no matter what happened, he needed to get the bus to stop moving. “I got up and pressed on the brake and told my little brother to call 911,” he said.

After the bus driver collapsed, Seamus realized he needed to keep his fellow classmates calm and in their seats. He said, “I was trying to keep everyone calm, tell everyone it was going to be okay, the police are on their way. I gave one of the other students a hug because he was crying and freaking out because he’s never been in a situation like this. Most of them haven’t.”

Thanks to the courageous efforts of these two young men, they managed to save the lives of everyone on the bus.

Had it not been for the quick thinking and actions of these two brothers, the bus could've veered off the road. The bus could have hit another vehicle in oncoming traffic or perhaps something worse could've happened. We thank God for his calming peace and wisdom as he surrounded this bus with his safety and protection.

"For God has not given us a spirit of fear and timidity, but of power, love, and self-discipline." 2 Timothy 1:7