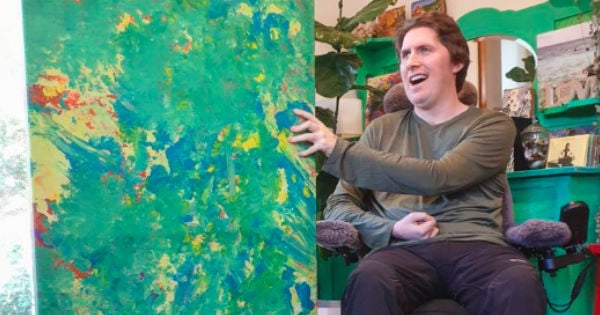 Callie Colwick is a 30-year-old mother who lives in Mckinney, Texas with her four-year-old daughter, Kenzi, and husband Kevin. In 2016 Callie was excited to learn she was pregnant with her 2nd child. This was the joyous news that Callie and Kevin were waiting for.

However, soon this pregnancy began to show complications. Callie developed a condition called placenta accreta while pregnant with her son. Placenta accreta is a dangerous condition that happens when the placenta detaches from the uterine wall during delivery.

RELATED: Mom Refuses To Give Up On Son After Severe Traumatic Brain Injury & Finds New Calling For Him

"I was at work about to go into a meeting and I felt this gush of liquid–my pants were soaked in blood. I went straight to the hospital and called Kevin," Callie recalled. It was then that Callie received the news that her baby could be born at any time, but he would not survive the delivery. "They put me in the pregnancy wing. Here we were in this room, surrounded by women giving birth and babies crying and we were just told that the baby had no chance of survival when I gave birth to him," Callie shared emotionally.

In one last effort to be able to save her baby, Callie tried the method of laying in the Trendelenburg Position, which is where she was laid on an incline at about 45 degrees and her pelvis rested higher than her head. In her fragile state, she was scared of making any sudden movements to disturb her baby.

Callie Colwick Tries Desperately To Save Her Unborn Baby

The doctors decided to induce labor. Quinn Colwick was stillborn weighing only half a pound. "They broke my waters and he was born. Quinn was too tiny to survive; he went straight to heaven," Callie relayed solemnly.

While giving birth to Quinn, Callie went into septic shock from her uterus due to the extreme blood loss due to her condition. It wasn’t until two months later that the doctors would make the decision to amputate her legs." My limbs started to die, my legs were shriveled up, my toes looked like raisins," the heartbroken mom recalled. Callie spent more than a year in the ICU before she was finally being able to come home. After she finished her long fight in the ICU, her struggles were not over yet.

Callie's health insurance denied the specialty wheelchair that she needed to be able to get around.

She felt constantly embarrassed because she couldn’t even push herself around in a wheelchair. Luckily for her, a GoFundMe page was started, and she was able to raise enough money to get the chair she needed, as well as ramps to be able to get around her home.

Within a day, a stranger from the internet, Amy Benhard, was able to raise more than $20,000 to support Callie. Callie was astounded by this random act of kindness.

"This generous gift from a complete stranger gives me the ability to make my home completely accessible. It's a lightweight custom-built chair so I can pick myself up and wheel myself around in it," Callie said. "I was 27 when this happened–no one expects a 27-year-old mom to die. I truly feel like I am living on borrowed time now." Callie said.

YOU MAY ALSO LIKE: Beloved Jeopardy Host Alex Trebek And Wife Jean Donate $500,000 To Help The Homeless

No one truly knows when their time is going to be up. The most that we can do is be positive, and put trust in God that everything is going to be alright. Callie has overcome so much and has come so far. She is a true inspiration.