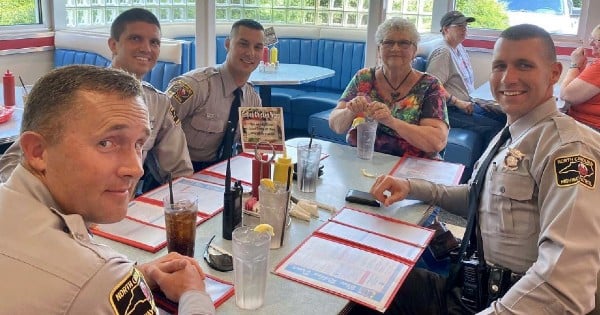 In this heartwarming story, one elderly neighbor has found a new friend in the 2-year-old boy that lives next door.

Benjamin Olson just turned 2 years old, and Mary O'Neill is about to be 100. The two are next-door neighbors, and during the pandemic, a friendship between the two has blossomed.

At first, they would play with each other in the backyard with their fence separating them. Benjamin would kick a ball, and Mary would lift her cane over the fence and bat it back to him. "We call it cane ball," explains Mary.

Sometimes, Benjamin would blow bubbles for Mary as she cheered him on. Mary even gave Benjamin some vintage Tonka trucks for him to play with in the backyard.

"My son’s," Mary shares. "He passed away, so they’ve been sitting down in the basement for years and years."

On top of losing her son, Mary was also widowed 37 years ago. And her grandchildren and great-grandchildren do not live nearby.

So having Benjamin and his little brother next door is something that Mary truly treasures. "They’re the closest thing to grandchildren I have around here," says Mary.

And with the pandemic being a part of most of Benjamin's life, his mother, Sarah Olson, says that her son "has never really had any other friends."

Thankfully, he now has Mary right next door to play with whenever he wants. And he now crosses over the fence and into Mary's yard so the two can spend time together in closer quarters.

YOU MAY ALSO LIKE: Olympic Runner Falls With Only 1 Lap Left But Refuses To Quit And Wins The Race

"I’m so happy they have each other," says Sarah.

Not even a gap of 98 years can keep Benjamin and Mary apart. What a sweet friendship!