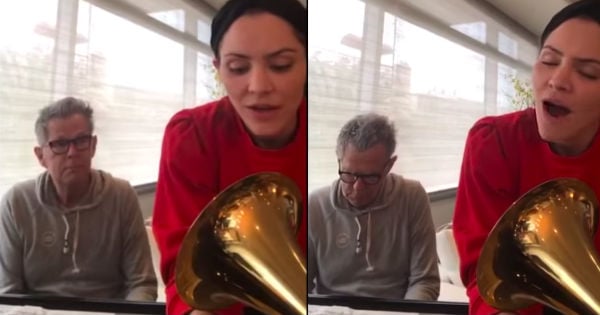 In this Elvis Presley rehearsal clip, the King of Rock and Roll sings a mashup of the song ‘Little Sister' and The Beatles' ‘Get Back.' This special rehearsal footage takes you back to the time before auto-tune was a thing, and you just can't beat that full, unadulterated sound!

Elvis released the song ‘Little Sister' in 1961. The song hit #5 on the Billboard Hot 100 list. In the UK Singles Chart, the song reached #1. ‘Little Sister' became one of those songs on Elvis' setlist that he would continue to play at all his live shows, including his final live show in Indianapolis on June 26, 1977.

During the filming of the 1970 documentary titled Elvis: That's The Way It Is, Elvis performed the song ‘Little Sister' in the studio with his band. During this performance, he fused it with the song ‘Get Back' by the Beatles. After hearing how well the two songs sounded together, Elvis would continue to perform this mashup for almost three years at his live shows.

The final rendition of this arrangement was performed on April 27, 1973 at his show in the Portland Coliseum. After that, Elvis went on to sing ‘Little Sister' as a stand-alone song until his last show.

YOU MAY ALSO LIKE: Elvis Presley's ‘Jailhouse Rock' Has This Grandma Doing The Jitterbug And Her Joy Is Contagious

It is so great that we have footage like this to look back on and see an intimate Elvis Presley rehearsal with just him and his band. They look so at ease together and are just having loads of fun doing what they love best, making music! It just doesn't get much better than that!