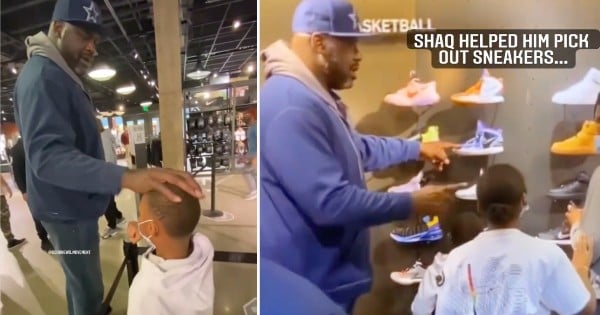 Shaq Spots Crying Kid At Store And After Schooling Him, Blesses Him With New Shoes
Read Article »

Elvis' stepbrother, Billy Stanley, shares about his relationship with Elvis and the conversation the two of them had before he passed away.

RELATED: Elvis' Grandson Auditions For The Voice And Stuns Judges With His Take On ‘Love Me Tender'

“[I remembered] he picked all three of us up at the same time and said, ‘I've always wanted a little brother. Now I got three,'” Billy Stanley shared. “We didn't know who he was, but he talked to us the rest of the night and tucked us in bed. And the next morning, he came running in like a fire drill, ‘You gotta get up!' We go out to the backyard and there are three of every kind of toy you could think of. He had a store open up after we went to bed.”

And Billy shared that Elvis didn't just shower them with presents, but also shared with them the importance of having faith. He taught his little brothers about prayer and showed them how to give thanks every night for their blessings. Billy was also influenced by how much time Elvis dedicated to reading his Bible and studying scripture.

“A lot of people don't realize that after every show, he would unwind by singing gospel songs until the sun came up,” shared Billy. “He was in touch with the Lord. A lot of people said, ‘Well, he did this and that.' [But] we all fall short. We're all human. As Christians, most of us live under a magnifying glass. Well, Elvis lived under a microscope because he was a big star. It was tough. But the way I like to put it is... [he] had the devil on one shoulder and God on the other. And there was a constant battle going on in his head.”

Elvis’ Stepbrother On His Relationship To The Iconic Singer

In the mid 70's, Elvis was struggling with his health and had developed a dependence on prescription drugs. His marriage to Priscilla Presley also ended in 1973. It was during these difficult times that Elvis really went to God's word for comfort.

“He would just dive into the Bible and read it,” said Billy. “Any experience that we all have is in the Bible... it will comfort you. I think the biggest thing everybody has a problem with is forgiveness. But God forgives. All you have to do is ask for it. But we have a hard time forgiving ourselves. Elvis often spoke about how God forgives us. He took great comfort in that... Once you start believing Jesus came and died for your sins, your actions will change. You will try to stop doing the things that aren't good for you.”

Billy continued: “He would tell me, ‘Billy… if we focus on helping somebody else... it's good for your soul to do that. The Bible says the Lord loves a generous giver and [Elvis] was the most generous giver I've ever met. Whenever you're feeling lonely or feeling like nobody loves you... you see that the devil's playground is your mind. But helping somebody else? It takes away all that self-doubt and fears you have going on in your life. That's what we're all put here on this Earth for. Elvis believed that.”

On August 14, 1977, Billy saw Elvis for the last time. The two brothers were hanging out together and enjoying each other's company when the mood became somber. “Do you believe God forgives us for all our sins?” Elvis asked Billy. He replied, “Well, yeah, I mean, we've talked about this for almost 17 years, Elvis.” “I just wanted to hear you say that, Billy,” said Elvis.

Then Elvis went on to talk to Billy about the changes he wanted to make in his life to better his future. He then told his little brother that he was going to read his Bible, and Billy said that he would see him later that week.

Billy Stanley wrote a memoir back in 1989 titled "Elvis, My Brother." And he recently wrote a new book titled "The Faith of Elvis." And the many lessons that he gained from his big brother are shared in his books.

“One of the lessons he taught me is to try to make the best out of every day because we're not guaranteed tomorrow. Every day is an event and that's how he treated it. He made the most out of every day. He lived it like it was his last day,” shared Billy. “What we saw on his entertainment level was maybe 20-30 percent of what he really was. He was far greater than that...he was a God-fearing patriot and a great big brother. The things he taught me about life, I've never forgotten.”

YOU MAY ALSO LIKE: Touching Moment The Royal Family Sings ‘The Lord Is My Shepherd' At The Queen's Funeral

What a beautiful relationship these two brothers had. And how wonderful that Billy has been able to honor Elvis and all that he taught him through his books.