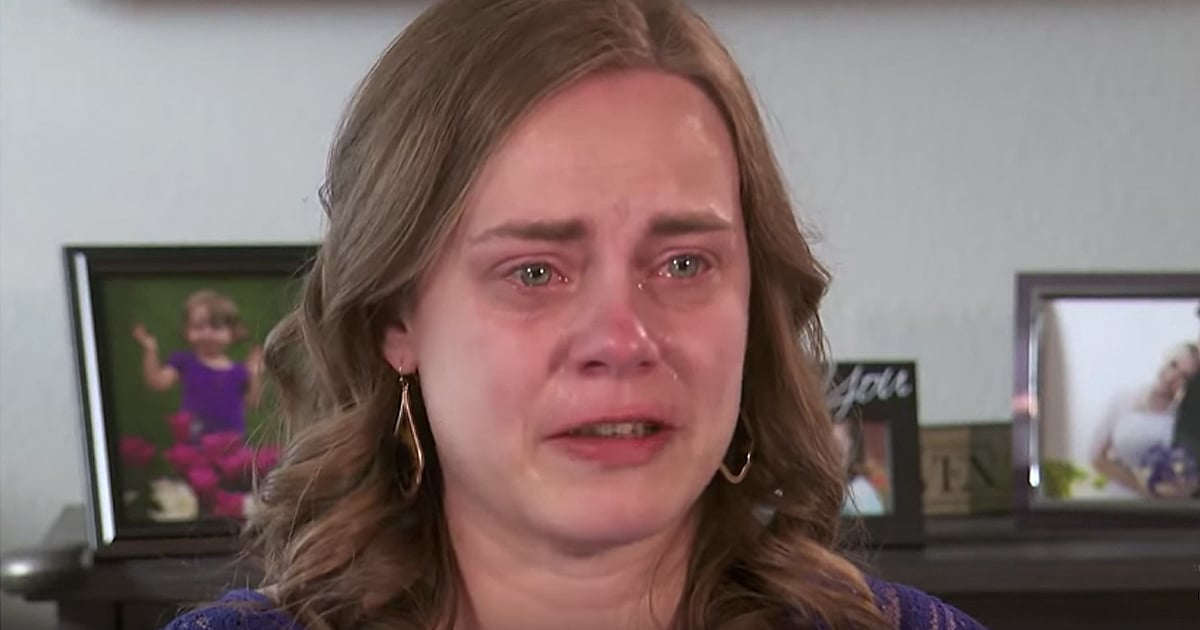 Energy drinks have become incredibly popular with the younger generation as an easy way to get a quick boost. But new studies are proving what grieving parents like those of 14-year-old Anais Fournier already know. Energy drink risks far outweigh any potential benefits.

Instant gratification has become a staple in today’s society. Everyone, it seems, is looking for a quick fix. And energy drinks promise just that — a quick energy boost. Quick, yes. But safe? More and more studies, along with heartbreaking tragedies, are suggesting the answer is no.

It’s no surprise our youth would find a product promising increased energy and focus appealing. Teens and young adults often turn to energy drinks as a way to boost athletic performance, increase concentration, or stay awake to study or even party. But many ignore or don’t realize the serious energy drink risks associated with this “quick fix.”

It’s the perfect recipe for disaster. And that’s why the families losing loved ones to energy-drink-related tragedies want to warn others.

One parent speaking out against energy drinks is Wendy Crossland of Hagerstown, Maryland. In 2012, her 14-year-old daughter, Anais Fournier, went into cardiac arrest after drinking two large cans of Monster.

Anais was hanging out with friends and drank two 24-ounce cans of Monster during the day. The family’s lawyer pointed out those two cans of Monster were the equivalent of fourteen 12-ounce cans of Coca-Cola. The next day, the young girl went into cardiac arrest and doctors placed her in a medically induced coma to keep her brain from swelling.

“We stayed up all night,” her mother, Wendy, recalled. “I laid in bed next to her all night long… We talked to her and stayed with her.”

Six days later, 14-year-old Anais died. Doctors ruled her official cause of death as cardiac arrhythmia due to caffeine toxicity.

“She never ever regained consciousness and we never got to say goodbye,” Anais’ heartbroken mother said. 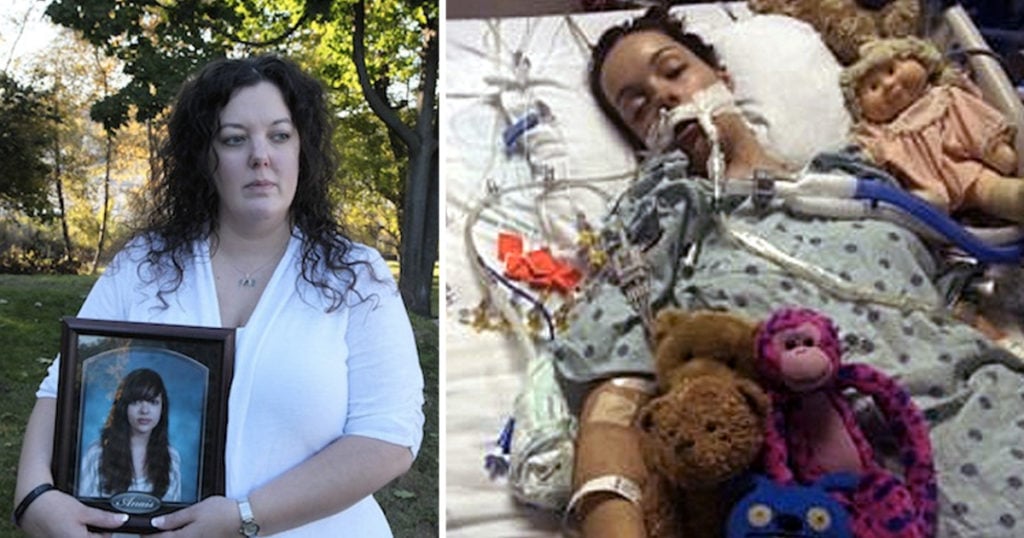 Since Anais had an underlying condition called mitral valve prolapse, which causes one of the heart’s valves to malfunction, Monster vehemently denied the two cans of Monster Energy alone caused her death. But the common heart condition that affects up to 1 in 20 Americans, usually with no issues. Anais’ doctors felt the condition posed little health risk to the teen.

Anais’ death is certainly not the only one with an energy drink link. In 2014, a healthy and active 16-year-old, Lanna Hamann, died suddenly of a heart attack. It turns out she’d been drinking energy drinks all day.

16-year-old Davis Cripe only drank one energy drink, but also consumed several other highly caffeinated beverages in a short period of time. With no history of heart problems, he too collapsed and died soon after (read more about Lanna and Davis here).

Experts agree these drinks are not suitable for children. In fact, most of the labels on these drinks even say “not recommended for children.” And yet, these energy-enhancing products are extremely popular with teens and young adults. Some even argue that the marketing for the drinks seems aimed specifically at today’s youth.

“I was shocked to learn the FDA can regulate caffeine in a can of soda but not these huge energy drinks,” Anais’ mom, Wendy, pointed out. “With their bright colors and names like Monster, Rockstar, and Full Throttle, these drinks are targeting teenagers with no oversight or accountability. These drinks are death traps for young, developing girls and boys, like my daughter, Anais… I want Anais’ life to send a loud and clear message to today’s youth that energy drinks can kill. I would like nothing more than to have these drinks regulated by the FDA and ban the sale to minors.”

“We have a massive problem with kids and energy drinks,” Jamie Oliver said. “Too many children are regularly using them to replace breakfast. Teachers from across the country have told me how their lessons are disrupted in classrooms because of these drinks, packed with stimulants… The sale to kids should be stopped as soon as possible.”

Plenty of folks regularly drink caffeine in coffee and soda. But energy drinks are like coffee on steroids. In addition to large amounts of caffeine, they also contain high quantities of sugar and additional artificial stimulants like taurine or guarana. While you can find many of these ingredients separately in other foods, it’s the combination and amount that makes energy drinks so scary.

According to clinical dietician Katherine Zeratsky from the Mayo Clinic in Rochester, Minnesota, “Overall, the concern is that these vitamins, amino acids, and herbals are often in higher concentrations than naturally in food or plants, and the effects when combined, especially with caffeine, may be enhanced.”

Though the American Beverage Association states many people have safely consumed energy drinks for years, many are starting to question how safe these drinks really are.

“They’re sort of a black box. We really don’t know a lot about them,” Dr. John Higgins, a sports cardiologist from the University of Texas Health Science Center in Houston, explained. “People need to be aware of that.”

Dr. Higgins went on to explain that energy drink risks could be especially dangerous for certain groups, such as people under the age of 18, pregnant women, those with caffeine sensitivity, those taking certain medications, etc.

What Happens To Your Body After Just 1 Energy Drink

Plenty of experts have growing concerns over energy drink risks. And more and more studies are starting to support these concerns.

Studies have already linked energy drinks to stomach, nerve, and heart problems. In fact, one study from the University of Waterloo in Ontario found that 55% of 12 to 24-year-olds surveyed reported suffering conditions such as vomiting, chest pains and even seizures after having the drinks.

Findings from a recent study from the University of Texas in Houston shows that consuming just one energy drink can increase the risk of heart attack and stroke in 90 minutes. That’s because energy drinks, even just one, narrow blood vessels, potentially restricting the flow of blood throughout the body and to vital organs.

For the study, healthy 20-year-olds classified as non-smokers drank a 24-ounce energy drink. Ninety minutes later, researchers measured the participants’ endothelial function (the layer of cells lining the surface of blood vessels) and found most had decreased in size by nearly half. This type of restriction of blood vessels has been shown to be an indicator of heart attacks as arteries aren’t able to fully dilate.

Dr. Higgins pointed to a case where a 28-year-old man drank 7-8 energy drinks before going into cardiac arrest.

“They found his arteries of his heart were completely locked up. When they were able to open them up, all the testing revealed nothing wrong with this person other than he had high levels of caffeine and taurine,” Dr. Higgins said.

It’s heartbreaking to hear all the stories of people who’ve suffered as a result of energy drinks. We pray studies like these will help open everyone’s eyes to the serious health risks these products pose.

Please be sure to share this story! While these drinks remain on the market without regulation, it’s extremely important everyone, especially parents and children, be aware of these energy drink risks.

YOU MAY ALSO LIKE: Couple Is About To Welcome Baby Boy, Then Dad Suffers Unthinkable Accident