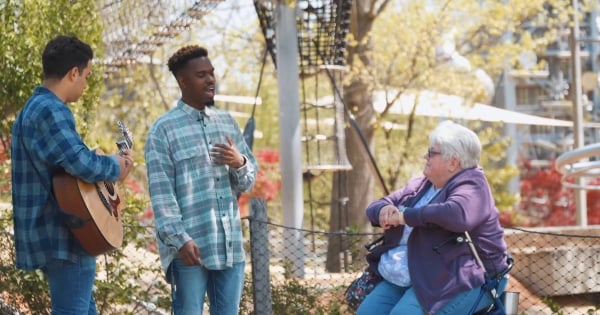 Strangers at the Park Get Surprise Serenade and Acts of Kindness by DeWayne Crocker Jr.
Read Article »

Siblings share so much, but the Robinson brothers of Redditch, England share the births of their first sons in an especially big way!

Not only do George and Joe Robinson live near one another, but they work together, too. And both brothers were expecting baby boys within just a few days of one another. But, that is just the beginning of the unlikely timing connected with the births of George and Joe's precious first sons!

Joe and his wife, Ellie, thought that their baby would be the younger of the two Robinson grandsons because the due date for brother George and his partner, Hayley's, baby was five days earlier.

RELATED: Twins Married Twins, Got Pregnant, and Now, the Salyer Twins' Babies Are Cousins and Brothers

But, we all know due dates are mere estimates. In fact, only 6% of women deliver on their given due dates, and just 70% give birth within ten days of their due dates.

That was the case for Joe and Ellie. Ellie went into labor five days early and delivered Reginald Geoffrey Robinson in the early morning hours of an April 2022 day. However, just in time for the sunrise and before the typical work day could even begin, George and Hayley welcomed their first-born boy, too. They named him Oliver James. Pretty cool! First sons who are cousins born on the same day are bound to be best buddies!

It may not be ideal to work on one's birthday, but Ami found that her recent April birthday was extraordinary even though she was on the clock. You see, Ami's birthday fell on the same day as the births of the brothers’ first sons, Reginald and Oliver! Furthermore, she helped in the births of both boys, less than 2.5 hours apart! That's an exciting day at the office!

RELATED: 2 Sisters Give Birth On The Same Day And Only 90 Minutes Apart

Hospital staff found the whole thing a bit confounding-Joe, George, Reginald, and Oliver Robinson all in the hospital on the same day, two brothers, two new babies. It was a little confusing. "When we told them we were brothers and both of our partners were in labour they couldn't get their heads around it," said Joe.

Best wishes to all of The Robinsons and to their awesome midwife, Ami! Hopefully, Ami will be on the job when the next one comes along!

"What is it you want?" he asked. She said, "Grant that one of these two sons of mine may sit at your right and the other at your left in your kingdom." Matthew 20:21

YOU MAY ALSO LIKE: 3 Firefighters Who Work Together Become Dads On The Same Day At The Same Hospital