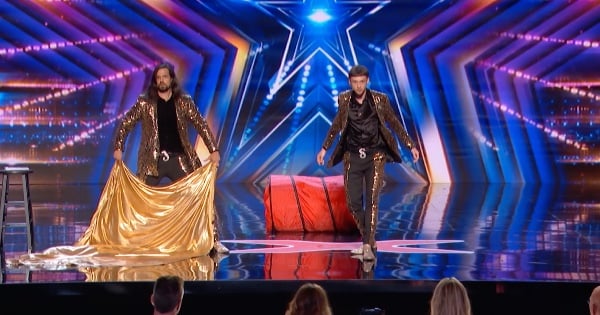 In funny outtakes from a local TV commercial for Dysart's restaurant in Hermon, Maine, husband Jack Palmer keeps messing up the same 6 words. But as funny as his bloopers are, the reaction from his wife, Sonya, is what steals the show!

By now, Jack and Sonya Palmer have been married for over 60 years. And they say the secret to their special bond as husband and wife is plenty of quality time.

“We do things together,” Sonya says. “That’s what keeps a marriage together!”

“I just can’t see me going someplace without her,” Jack adds. “Someday one of us will be gone and it’s hard to believe that… So even when she goes shopping — and I hate shopping — I go with her.”

One of the places the couple goes together regularly is Dysart's restaurant in Hermon, Maine. In fact, Jack and Sonya Palmer have been grabbing a meal there together every day for over 40 years.

So, when it came time to shoot a commercial for the restaurant in 2012, the Palmers seemed like a natural fit. Rather than hire actors, why not just have these real-life regulars star in the ad?

But things didn’t go as smoothly as planned. And it led to some funny outtakes that are still making their rounds today!

The smiling couple was more than happy to promote their favorite restaurant. And all Jack had to do was deliver the line, “Baked in a buttery, flaky crust.”

But no one anticipated just how much trouble those 6 little words would give Jack. Time and time again, he flubbed the line.

In the funny outtakes, just about everyone on set was cracking up — even Jack. But one person didn’t find the mix-ups quite so amusing. And that was Sonya.

Seeing Jack get so tongue twisted was pretty hilarious. But watching Sonya react to her husband’s blunders was just as entertaining!

While Jack was completely tickled every time he fumbled over the words “buttery, flaky crust,” Sonya couldn’t look any less amused. And her faces were priceless!

Eventually, Sonya even remarked that they should have given her the line. To which Jack immediately responded, “Oh yeah, she does that good.” (Spoken like a wise husband, Jack)

So finally, the producers asked Sonya to take over. And that’s when the funny outtakes got even funnier. Turns out the words “baked in a buttery, flaky crust” aren’t that easy to say directly to the camera!

(Please note, there is one instance where Jack curses after flubbing the line)

They did finally manage to finish the commercial. But once the funny outtakes of Jack and Sonya Palmer made it to Youtube, the adorable couple went viral!

While the bloopers that launched the Palmers into Internet celebrity may be from 2012, the laughs are just as hilarious today. And over the years, the clip has resurfaced time and time again, gaining even more popularity.

In fact, Will Ferrell and Kate McKinnon performed a spoof of the funny outtakes in 2018 as a skit for Saturday Night Live.

“They did good as far as I'm concerned,” Jack Palmer said after they finally saw the skit. “Especially with what they had to work with. Fantastic.”

But I think most would agree that Jack and Sonya did it best.

“Personally, I think Jack and Sonya were a little bit better,” said Elizabeth Sutherland, a partner from the company who filmed the original Dysart's restaurant commercial. “I think that comes from the years of teamwork that married couple has.”

Jack and Sonya Palmer still continue to dine regularly at Dysart's restaurant. And with their funny outtakes continually making their rounds online, they still get approached by fans.

And that’s exactly what makes the funny outtakes from the commercial shoot so endearing. We’ve all experienced that moment where we thought something would be quick and easy, but suddenly it becomes so doggone hard!

"We were sitting over there by the cash register, and there were waitresses around looking at us," Sonya explained. "It isn't as easy as people think it is."

And the interaction between this sweet married couple is so relatable.

"I just couldn't remember my lines," Jack said. "A few more minutes, and it would have been murder. Every time I looked over she had that look in her eye."

The commercial shoot gave Sonya and Jack Palmer just one more treasured experience together and turned them into Internet stars. And while the viral fame certainly hasn’t gone to the couple’s heads, it’s provided them with another special blessing.

"You really meet so many nice people," said Jack Palmer.

At the end of the day, these two just reflect back on the laughs from that fateful day. And what an inspiration it is to see a couple in love for so many years!