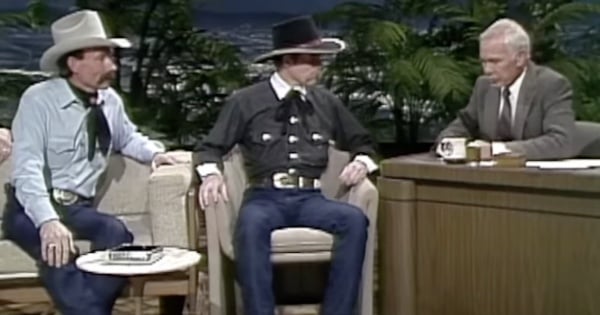 Siegfried & Joy, the best ‘worst magicians’, may not have won Simon over, but their unique America’s Got Talent audition certainly had everyone else cracking up!

Meet Siegfried and Joy. Their act's name is clearly a shout-out to, or perhaps a spoof of, the once wildly popular magicians Siegfried Fischbacher and Roy Horn, better known as Siegfried and Roy.

RELATED: Christian Magician Dustin Tavella Uses AGT Finals To Remind Us Of The Power Of Kindness

While the similarities seem significant, they are quite minor. Siegfried and Roy were bonafide and brilliant magicians, serious about their craft. But Siegfried & Joy not so much! The two performers coming before the AGT panel of judges in this video are far more comedians than magicians, much more wacky than mysterious!

Check the two out as they "annoy" Simon while winning over the others with their silly, but very creative act!

Dressed in shiny, brown animal print jackets and black shirts, Siegfried and Joy wear silver, glittery "S" and "J" belt buckles. Joy's is a little crooked, which is appropriate, because their act is a little off center, too! Joy tells Simon that they are the "new superstars of magic." But, something tells us this might not be the case!

Their first trick is levitation, which looks to be legitimate until Joy "accidentally" pulls the gold drape off of Siegfried and reveals that he's using one leg to hold his body up and con the audience. There is a bogus disappearing act and a "vorhersage" tunnel trick. This one is clearly just for Heidi, who is also German. "Vorhersage" is a German word meaning "forecast" or "prediction." So, the judges are asked to guess what type of fruit is inside the tunnel.

Though the trick is mostly a sham, the performance of the poorly executed illusion is endearing to both the audience and the three more charitable judges on the panel. That concludes the official performance. But the routine continues as the judges deliberate, and this may be the funniest part!

Siegfried & Joy Win Over All But Simon

They gift Heidi with a packaged strawberry, which she catches beautifully even with her freakishly long nails. As Howie expresses his delight that the show is getting to see comedy in the current season, Joy begins brushing his long, black hair. It's just zany! We get shooting snot and tear blasts, and, in the end, Simon's confusion over the whole thing is meaningless when Sofia gives the third yes!

Siegfried and Joy are poking fun at magic and themselves, offering up a slapstick act where buffoonery rather than mystery is the real treat!

YOU MAY ALSO LIKE: 25-Year-Old Quick-Change Artist Wows On AGT With A Performance That's Simply Mind-Blowing

"Light in a messenger's eyes brings joy to the heart, and good news gives health to the bones." Proverbs 15:30