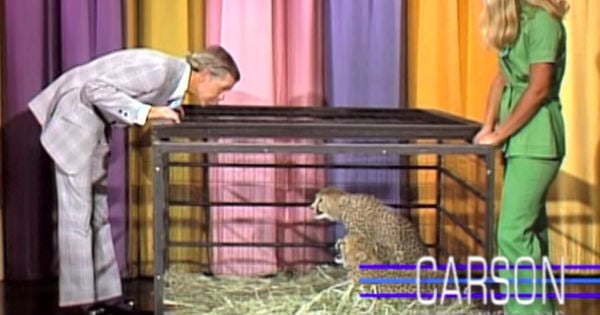 In a classic clip from 1987, two cowboys have Johnny Carson cracking up at their poetry. There are no dirty jokes or demeaning comments here, just some good old-fashioned laughs!

Two cowboys — Waddie Mitchell and Baxter Black — visit Johnny Carson on behalf of the annual Elko Nevada Cowboy Poetry gathering. With mustaches as unique as their names, these guys deliver two hilarious poems guaranteed to tickle your funny bone, just as they did Johnny's 35 years ago!

RELATED: Johnny Carson Interviews Oldest Farmer And He Ends Up Stealing The Show In This Classic Clip

Once on stage, Johnny asks Waddie, who is actually appearing on the show for his third time, how he feels about the depiction of cowboys in movies. Waddie answers Johnny's inquiry with a "story" in verse written by Gail Gardner.

Waddie tells the tale of a cowboy who once had a mighty fine partner, one able to rope well and who sported well-worn jeans. The cowboy's companion was shy and steered clear of women, because "he knew that they was poison." But, the cowboy's fellow rider went missing.

As the poem continues, the cowboy runs into his friend, but hardly recognizes him. Now, it seems, his valued comrade has turned into something else. After taking up with a Chicago woman, he's now wearing crazy clothes and serving as a hand to folks at a dude ranch!

So shocked is the tale-teller with the demise of his cowboy colleague, he shoots him and leaves him for dead, saying, "When a cowboy turns a dude wrangler, he ain't no good no more at all." It's tragic!

When Waddie finishes reciting his sad, funny poem, Johnny leans forward and addresses singer Robert Goulet. Johnny points out how well Waddie memorized the entire, long verse. This results in laughter from Mr. Goulet and perhaps is in reference to a conversation they'd had earlier in the show.

Next, Johnny turns his attention to the other of the two cowboys. Baxter was once a veterinarian before he began performing cowboy poetry for a living. Baxter has a dry sense of humor, referring to "big places" like Buffalo, WY, and Sioux Center, Iowa, and to his brand of cowboy poetry as "lunatic fringe."

RELATED: Atheist On A Plane Says There's No God But A Cowboy's Reply Shuts Him Down Quick

Baxter explains that cowboys and vegetarians don't always relate to one another, given the fact that cowboys are particularly fond of beef. He goes on to say that he'd recently learned that plants feel pain, and, as such, he became inspired to write "The Vegetarian's Nightmare."

The poem begins with the simple planting of a garden. But, it turns from good-natured to ghastly when the gardener craves a salad. It's pure silliness, but it is also pure fun. He describes all sorts of cruelty to the produce as he procures the ingredients for his salad! Baxter says, "Then with the blade of my True Value spade, I exhumed a slumbering tater." That's just one of the wonderful lines that Baxter delivers with sound effects and considerable drama!

Both gentlemen are very entertaining, as Johnny Carson always was. And, it just goes to show that comedy doesn't have to be profane or hurtful. Some of the very best bits are just good ‘old fun!

YOU MAY ALSO LIKE: Convenience Store Robbery Doesn't Go As Planned After Heroic Cowboy Jumps In

"Dear friends, this is now my second letter to you. I have written both of them as reminders to stimulate you to wholesome thinking." 2 Peter 3:1