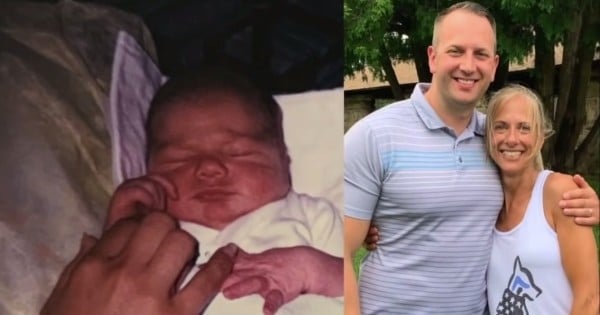 Not a Day Went by That She Didn’t Think about Baby She Gave Up 33 Years Ago, Then They Met
Read Article »

During flash flooding in Washington, DC, a group of Marines came marching through the high water to rescue a driver in need of help. And thankfully, the incredible moment was caught on camera!

When unexpected flash flooding broke out in the Washington, DC area, passengers in one vehicle found themselves trapped just outside of Arlington Cemetery.

But God made sure some special heroes were in the right place at the right time to lend a helping hand. And the powerful moment, caught on camera and shared all over social media, is just the kind of positive news story so many of us need!

Group Of Marines Marches To The Rescue

On the day of the flash flooding in the DC metro area, The Marine Corps Body Bearers were leaving a funeral service at Arlington Cemetery. And they couldn’t help but notice a vehicle trapped in the rushing floodwater.

Despite the turbulent conditions, the group of marines exited their bus and made their way over to the car that was in danger. And the scene of the brave servicemen, dressed in their crisp uniforms, wading through the deep waters, made a huge impression on the people in the vehicle.

“This is the most American thing ever,” gushed one of the appreciative passengers who was overcome with emotion.

The Marines pushed past their bus to safety under an overpass where the police took over.

From the moment the group of Marines spotted the car in danger, they felt the call to come to the rescue.

“If there's anyone who's going to help these people, it'd be us,” explained one of the rescuers, Corporal Mitchell Wojtowicz.

“We're all pretty like-minded group of individuals, not just as Body Bearers, just as Marines and service members. More or less, we just want to lend a helping hand and be good to one another,” continued fellow Marine, Corporal Jared Tosner.

RELATED: An Answered Prayer And Special Angel Saves Mom And Baby Trapped In A Sinking Car

All the attention following the incident came as a surprise to the humble heroes. For them, they were “just trying to do the right thing when no one's watching.” The group of Marines had no idea a passenger inside the vehicle was filming the entire time with her phone. And after sharing the video on TikTok, the incredible rescue quickly went viral!

The Marines performed the rescue with no intention of any kind of recognition. But it certainly seems like God has a greater purpose at play. Perhaps Corporal Mitchell Wojtowicz summed it up best:

“I feel like the positivity that has come from this overwhelmingly kind of underscores a wider issue. And it’s that people feel starved for just wholesome positivity,” he said. “We could all do well to really put forth more of that – you know, really help each other out.”

Indeed, all it takes is one small act of kindness to have a huge impact. Be sure to share the story about this group of Marines with someone as a reminder that each of us has the power to spread kindness and love!

YOU MAY ALSO LIKE: Group Of Bikers Make Cross-Country Trip To Bring A Fallen Hero Home

“Even so, let your light shine before men; that they may see your good works, and glorify your Father who is in heaven.” Matthew 5:16